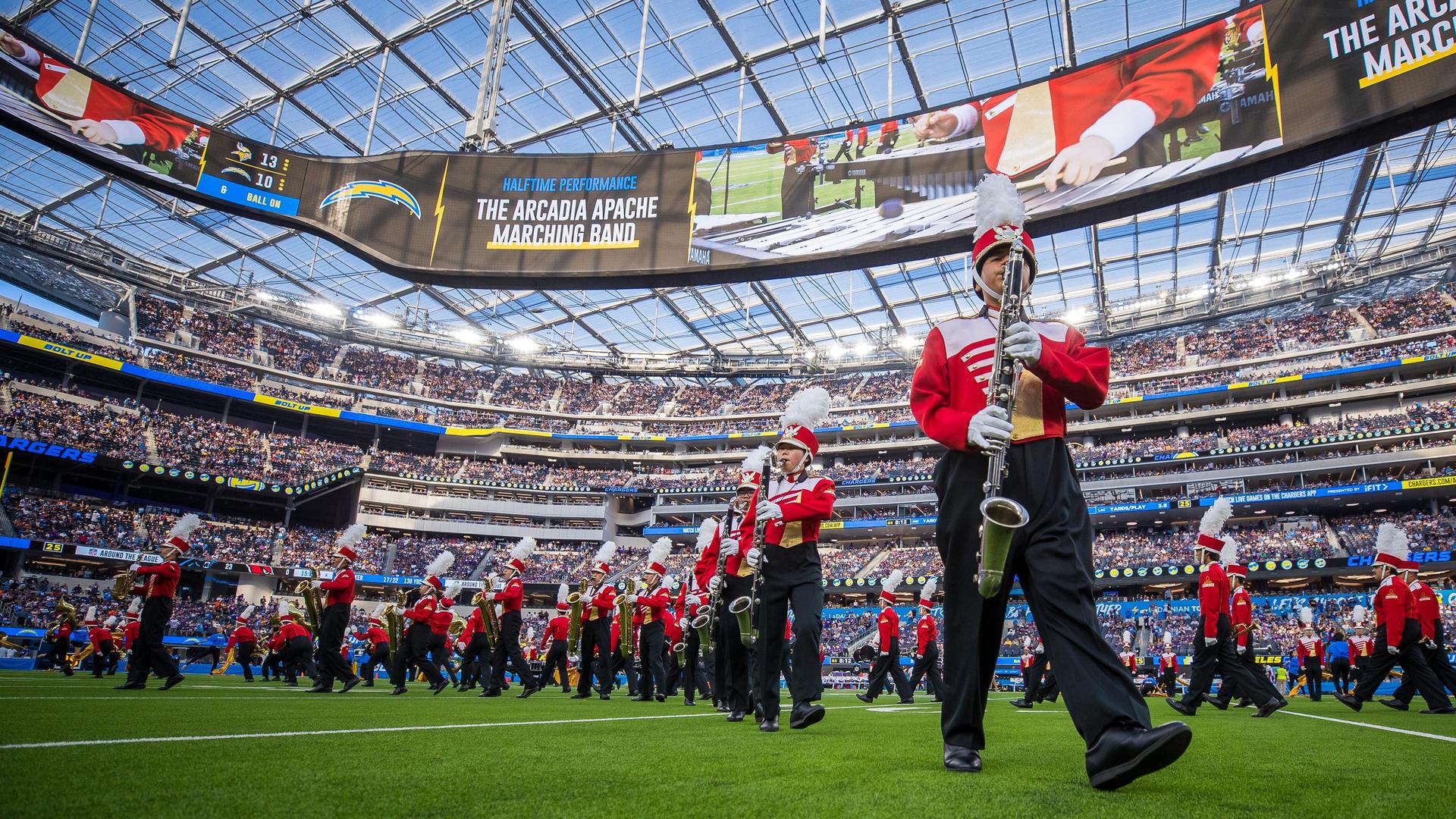 (Photo Courtesy of the Chargers Organization)

The Arcadia High School Marching Band and Color Guard have a decorated performance history, which includes appearances at the first Super Bowl ever hosted in Los Angeles, the 2005 Presidential Inauguration Parade, and the renowned Rose Parade, to name a few. Now, Arcadia High’s Marching Band and Color Guard program can add honors as the first high school team to perform at the brand new SoFi Stadium during an NFL Chargers halftime show to its history book.

“As soon as Elise’s hand started moving, everything went in place,” said Alec Tandoc, Arcadia High band president and alto saxophonist, recounting what he remembered from his experience performing in front of tens of thousands of fans in the stands of SoFi stadium. Tandoc is referring to Elise Fong, this year’s Arcadia High marching band drum major, who leads all the Marching Band and Color Guard performances.

“We got a phone call from the Chargers’ entertainment team, and they were looking for their first marching band performance in SoFi,” said Thomas Plunkett, one of two Arcadia High School Band Directors.

“The entertainment team went to the list of local bands that had been in the Rose Parade to find good bands. They used the experience of being invited to the Rose Parade as a starting point, and they watched some of our season videos, decided we would be a fun show to have at their stadium, and we got the invite,” Plunkett explained.

Performing in front of 75,000 NFL fans, the Arcadia High Marching Band and Color Guard were very excited to showcase their work at SoFi stadium for the first time; however, the performance did not come without its challenges.

“I definitely did not expect to have so many last-minute changes to our show,” said Kate Fletcher, one of Arcadia High’s Color Guard captains. “Unfortunately, our performance uniforms were purple, as were the uniforms of the opposing team.” Because the Chargers media team did not want any purple--the color of the Minnesota Vikings--on the field during halftime, the Color Guard performers were asked to make alterations to their uniforms. Fletcher and her fellow captains worked in tandem with the Chargers’ event coordinators so that Color Guard could perform with Chargers’ shirts, different makeup, and fewer flags. 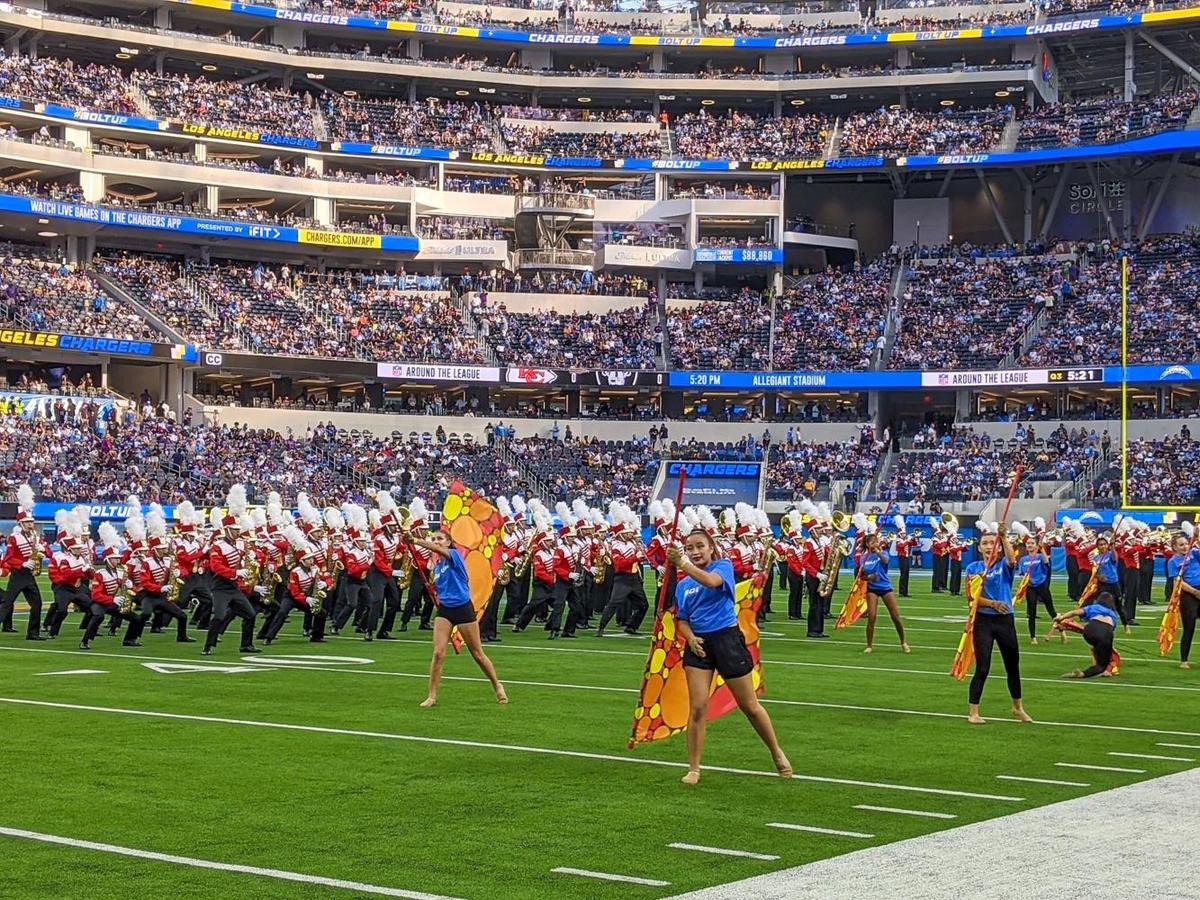 Another big challenge was time.

“Their halftime has time constraints,” explained Plunkett. “We had to modify our show by making it shorter, yet still exciting.”

As a result of the limited length of halftime, the Arcadia High Marching Band and Color Guard had to resort to using only two-thirds of their performance and set up their entire show--drums, instruments, flags, and more--in just two minutes. Additionally, the band had to adapt to the different sized hash marks of a professional field, which they prepared for by re-marking hash marks on their own practice field.

Lots of practice and preparation for this show at SoFi stadium were not the only things that helped the performance run smoothly. With 25 Arcadia High instructors working with different sections of the band, as well as 30 parent volunteers and boosters acting as chaperones, equipment movers, and uniform helpers, Arcadia High’s Marching Band and Color Guard were able to perform without worrying about handling as many of the logistics aspects and could place their focus on the performance.

“We had a morning parade competition and evening field show competition the day before the halftime show,” emphasized Plunkett. “We had a 6:30 wake-up call and call time here at [Arcadia High] school for a Sunday performance, which is unusual for the band.”

Though the students were tired from the full day of competition the day prior, their exhaustion from returning home at midnight quickly turned to excitement as they practiced and got ready for their SoFi spotlight.

“When we walked into the tunnel and saw that almost every single seat was full and the stadium was radiating with energy,” said Fletcher excitedly, “it just really set in how many people were going to see our show.”

What factors helped Arcadia High be the first high school to perform at SoFi Stadium? Hard work and dedication. In a regular performance season, the Arcadia High School Marching Band and Color Guard prepare for competitions and performances by averaging over 10 hours of practice each week, which includes having their first class period of the day together to practice. They also practice several times a week after school, with the main group rehearsal on Wednesday nights, which lasts about five hours.

A fitting name for their Chargers halftime show appearance, the Arcadia High Marching Band and Color Guard performed their field show named “Spotlight”, which theme centers on the frustrations of artists cooped up during the pandemic. In the first part of the show, a Color Guard member plays the role of a new celebrity who is born and is curious and excited about their new life; however, this excitement soon turns to greed as they manipulate the spotlight for themselves, an action represented by the alto saxophone soloist, Alec Tandoc.

Later on, the baritone soloist, Iris Ye, shows the consequences of selfishly harnessing the spotlight. To wrap up the performance, flute soloist, Cassie Kao, performs the star’s redemption. Watch a performance of “Spotlight” here.

“I wish I was out there performing,” Plunkett proclaimed. “It seemed so fun. Seeing the students out there in that terrific venue and the glorious stadium behind them, I was just really proud and [it] made me think about all of the hours we put into this season.”

“I think the highlight of this experience is seeing the students perform and smiling after they were done and looking around the stadium and realizing what they had just accomplished,” Plunkett further reflected. “I hope for the students that they are able to see the pay-off of their hard work.”

Currently, the Arcadia High School Marching Band and Color Guard are getting ready to compete in several championship competitions for their 2021-22 season, as are they excitedly preparing to perform in the Rose Parade on Jan. 1, 2022. Tune in to your local news stations or any Rose Tournament-affiliated streaming sites to join the millions of others who will be watching their performance live on New Year’s Day.