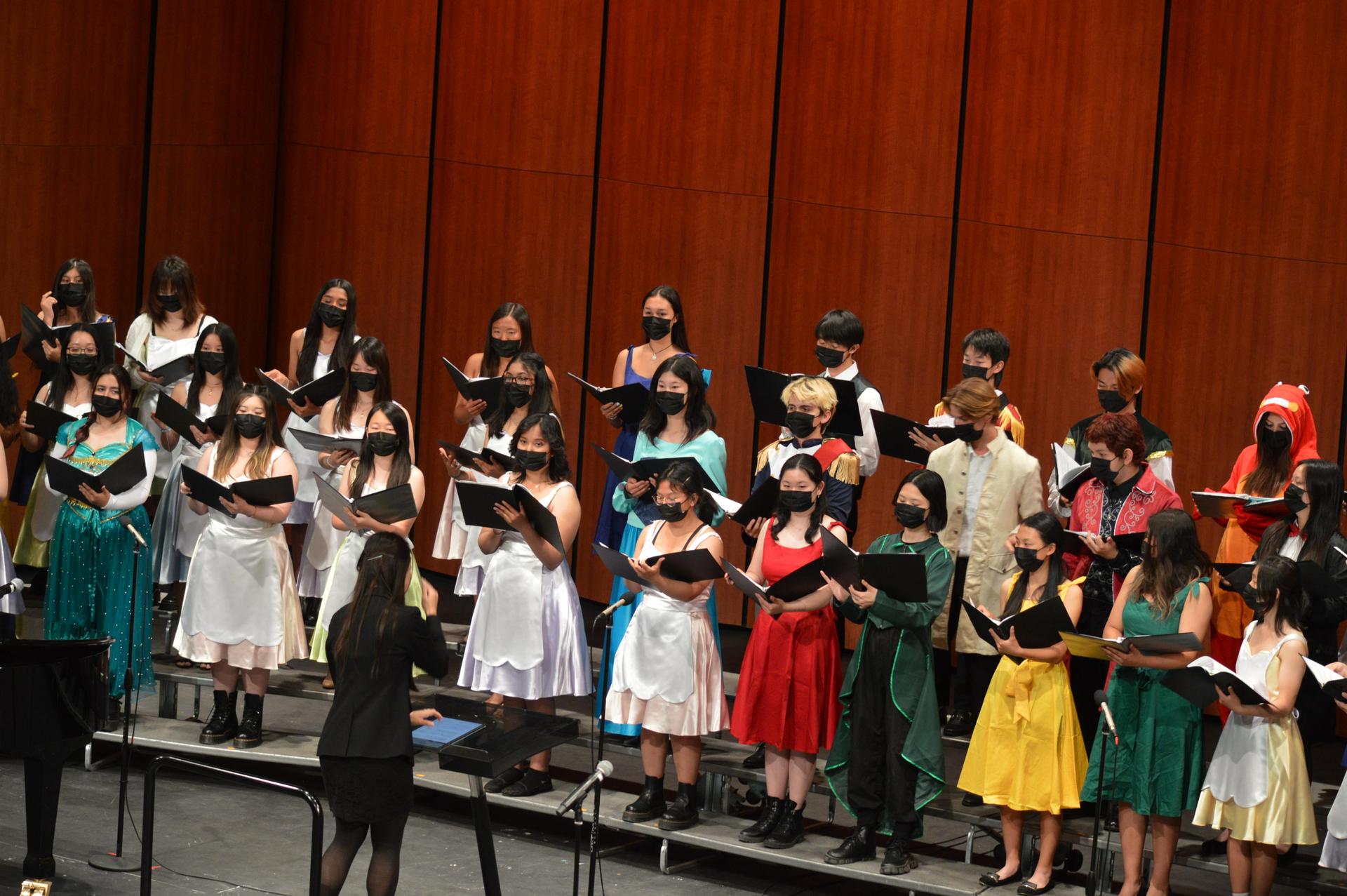 The Arcadia High School (AHS) Choral Program will be hosting its first annual Benefit Concert, Choir Night Café, which marks the return of Show Choir following distance learning. The concert will take place this Friday, May 20, at 6 p.m. in the Arcadia Performing Arts Center.

For Arcadia High School’s (AHS) Choral Program, 2022 has been a year marked with change. With a new director, a return to in-person performances, and now, its very first Choir Night Café Benefit Concert, AHS’s Choral Program continues to build upon its legacy.

“Choir is a family with such profound and tender memories,” shared Freshman Concert Choir member Naveen Imran. The AHS Choral Program has been ongoing for over 70 years since Arcadia High School first opened in 1952. The program has offered generations of Arcadia students a space to freely express themselves through mediums of dance and music.

“When I first joined Choir,” wrote senior Chanteurs member Sofía Nagy, “I was the shyest and most inhibited person you could imagine, but through time, …[I’ve been] able to sing boisterously, dance freely, and perform a solo.” Initially starting out as a performer in Concert Choir, Sofía worked towards and earned a spot in the Chanteurs ensemble.

“In other concerts, we [Choir] collaborate with other groups like the First Avenue Choir and Orchestra, but this one is just us,” exclaimed Sophomore Chanteurs member Kalei Chang.

“We get to showcase our abilities, and that’s really exciting.”

Several Choir members have not yet participated in an event that truly showcases their individual talents, which makes the upcoming Choir Night Café Benefit Concert a particularly special event. After a difficult year of Choir through distance learning that heightened the challenges of performing, Choir members are finally able to gain a sense of normalcy this year. Though the program does not face the difficulty of internet issues or students singing from their bedrooms this school year, the program took on the equally arduous task of forming an entirely new event this year. 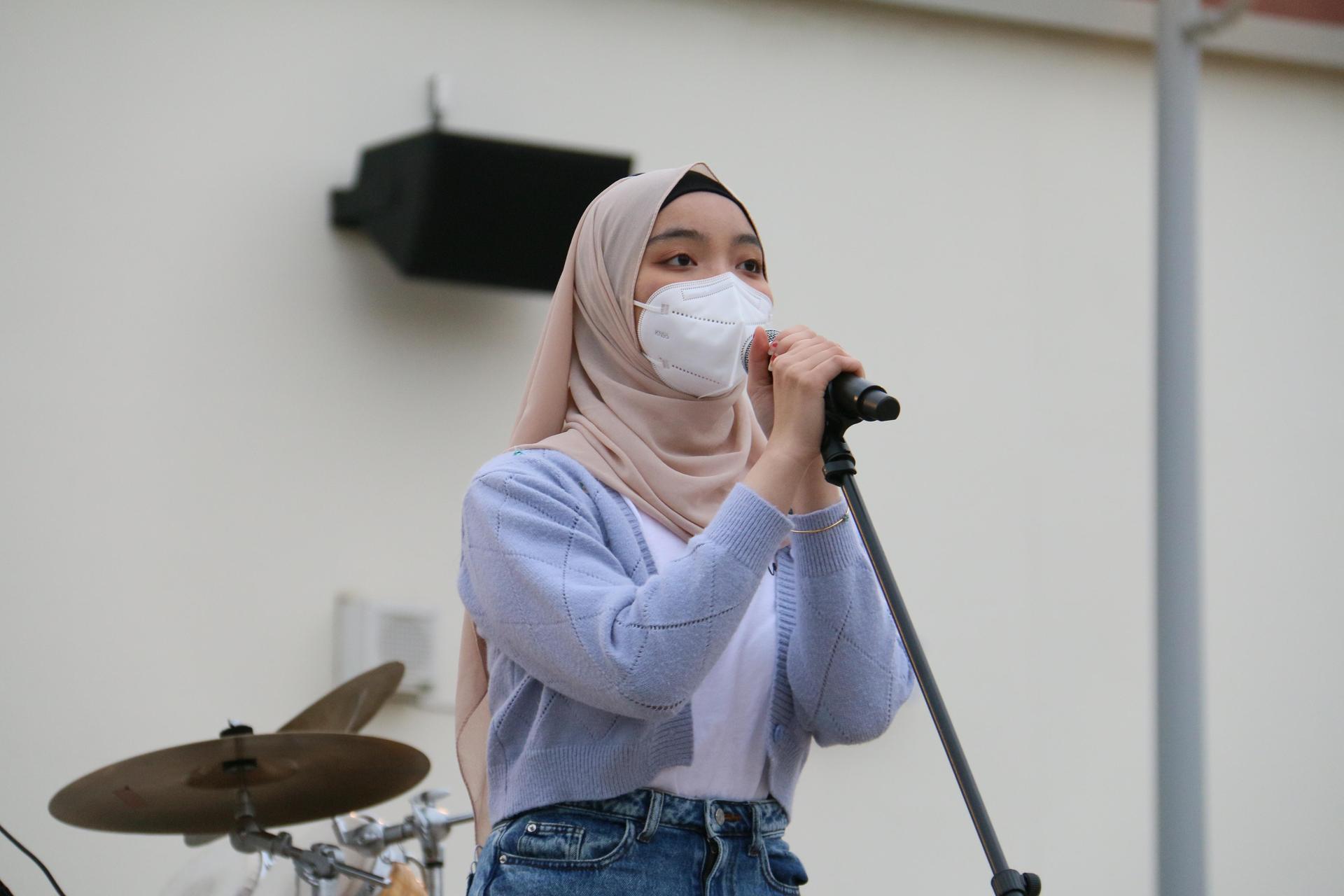 Chanteurs Dance Captain Zayanah Rasyamond performing for Spring Preview on March 31. The Benefit Concert marks a shift in Choir performing for its own event.

Connie Tu, who is in her inaugural year as AHS’s Choir director, explained that when she saw the remarkable talents in both the Chanteurs and Concert Choir ensemble, she made it her mission to highlight those talents. Though Choir has since performed at three concerts, including one at Disney’s California Adventure Park and the Tree Lighting ceremony at San Gabriel Mission, Tu wanted a special event that could connect the Arcadia community. That’s when the idea for the Choir Night Café Benefit Concert was born.

The Benefit Concert will consist of both individual and small group performances with a collective Chanteurs performance (Show Choir) towards the end of the concert. The Show Choir number will contain songs from the 2016 hit musical and film “La La Land.” The number will highlight parts of the musical and embody the liveliness and musicality of the film.

The Choir students, who will perform individually or in small groups, had to find a song of their choice and develop a performance that would undergo an evaluation by Tu.  If the performance was approved, students earned their spot at the Benefit Concert. Some songs that will be performed are “Night Changes” by One Direction and “Fly Me To The Moon” by Frank Sinatra.

Students were given creative liberty, which in Tu’s opinion, made the process of developing the performances very student-oriented. For Tu, giving students that sense of responsibility gave them “more motivation and helped them learn through the process.” Students had to take initiative by “showing up for things, practicing their music knowledge, and presenting leadership skills.”

Students like Senior Chanteurs member and dance captain, Zayanah Rasyamond, took on difficult tasks like “leading a lot of the afterschool rehearsals, warmups” and helping peers become more familiar with the show choreography. To best embody the movie, students learned how to dance and sing the parts necessary with the support of Tu and professional Show Choir choreographer Dominic Matas.

Though Arcadia Choir members have many school-related responsibilities, the students make sure to dedicate time to putting the show on. Chanteurs member Kayleen Hello, who will be performing a solo to the song “Back to Black” by Amy Winehouse, described how she practiced out of school by “finding the karaoke version of the song on Youtube, following along” and constantly rehearsing. 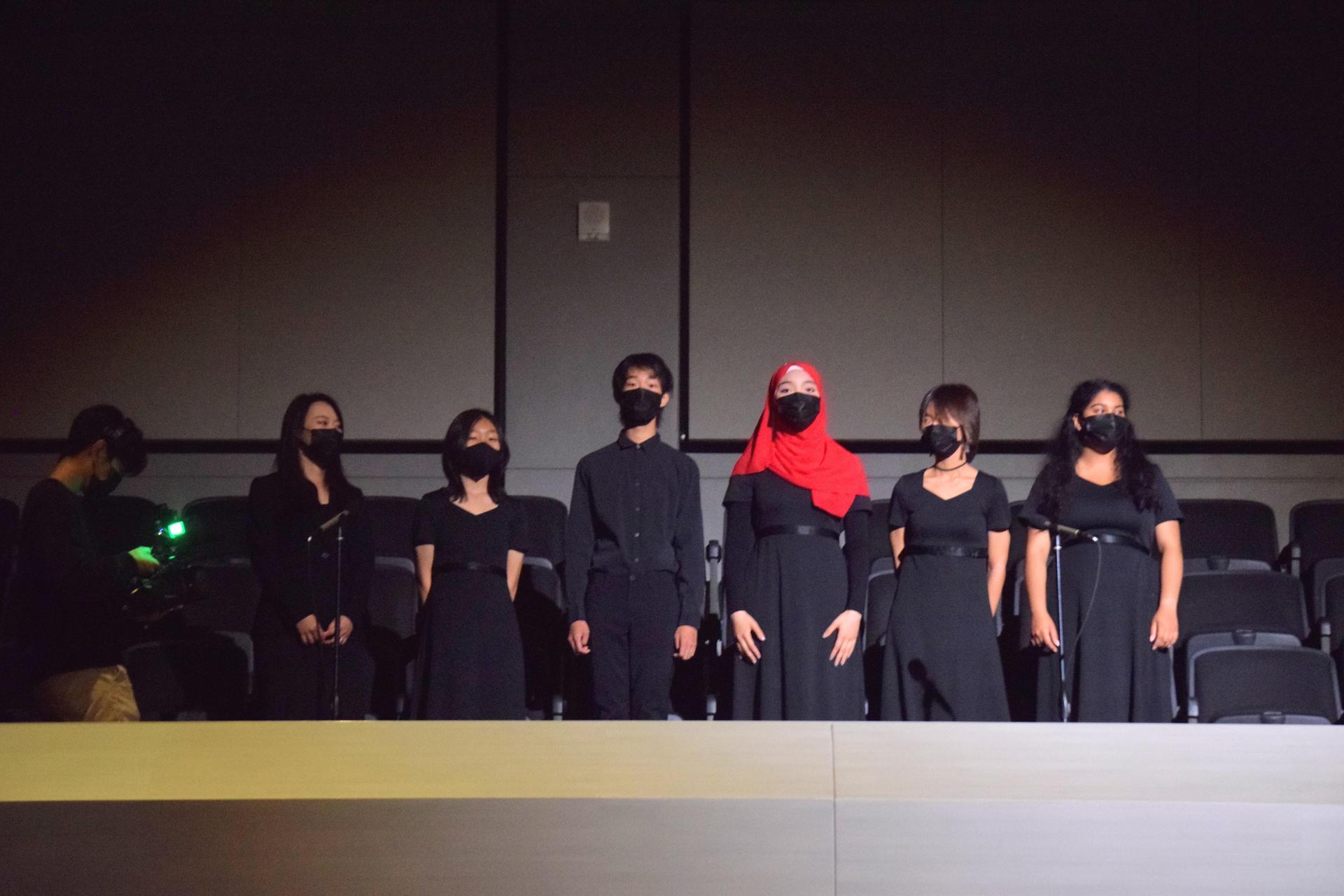 Despite the difficulties Choir faces running the show itself, Choir members appreciate the opportunity they have to perform pieces that reflect their individual passions and skills. Sophomore Chanteurs member, Kalei Chang, expressed that as a child, she always wanted to be a ballerina but never really took to her aspirations, but the Benefit Concert gave her the opportunity to “pursue her dream in other ways.”

(Courtesy Apache News Live Stream from the State of the District)

The concert marks an evolution in Arcadia’s Choral Program, both in the sense of giving students creative liberty and hosting a concert that’s the first of its kind. Other music programs, such as Arcadia High’s Orchestra and Band, have previously held Benefit Concert/Dinner performances, but this is the first time Choir will host a Benefit event. The show will also mark the return of Show Choir, which has not performed since a pre-pandemic “The Greatest Showman” number. 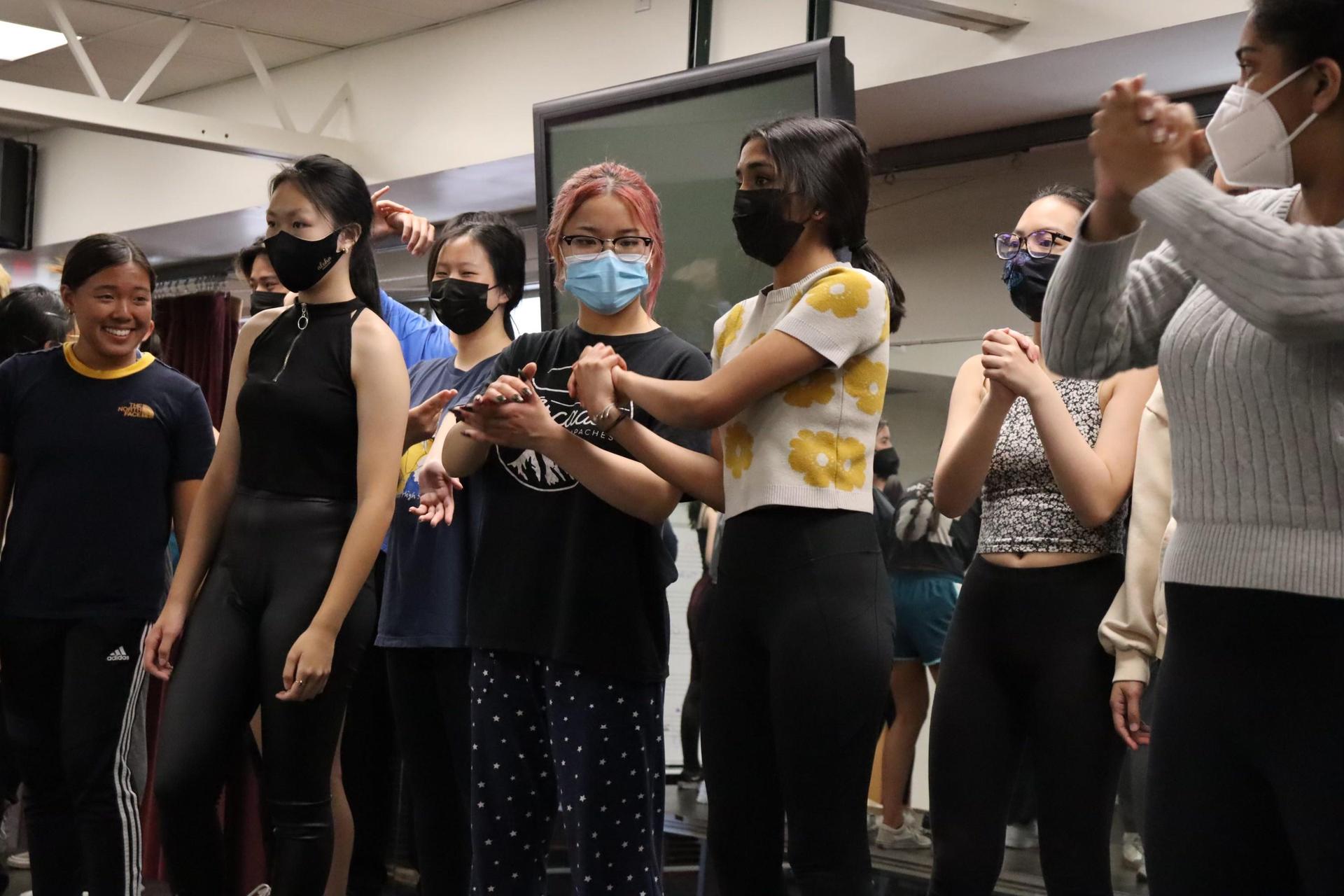 Chanteurs members practicing singing and dancing for the Benefit Concert.

The Benefit Concert will be structured into two parts. The beginning half highlights students’ individuality through solos and group performances and the latter half will feature a grand finale by Chanteurs. During the first portion of the Concert, viewers can walk around, purchase refreshments from local business Gokí Cafe, and participate in the silent auction made up of generously donated items from families and local businesses. Funds collected from ticket sales and the silent auction will go towards equipment and other materials necessary to support the continued growth of the AHS Choral Program.

In the second half of the concert, the “La La Land” show number filled with energetic dancing and singing will be performed by the Chanteurs ensemble. Attendees can get the best of both worlds with the ambiance of the concert shifting as the night progresses, starting with a calm, jazzy atmosphere and ending with an energetic one.

With the promise of fun and exhilaration, community members are encouraged to attend on Friday, May 20, 2022 at 6 p.m. in the Arcadia Performing Arts Center. Tickets cost $25 and include a free soda voucher. Visit Arcadia Choral Program’s Instagram page and website for more updates and information about the concert and program.