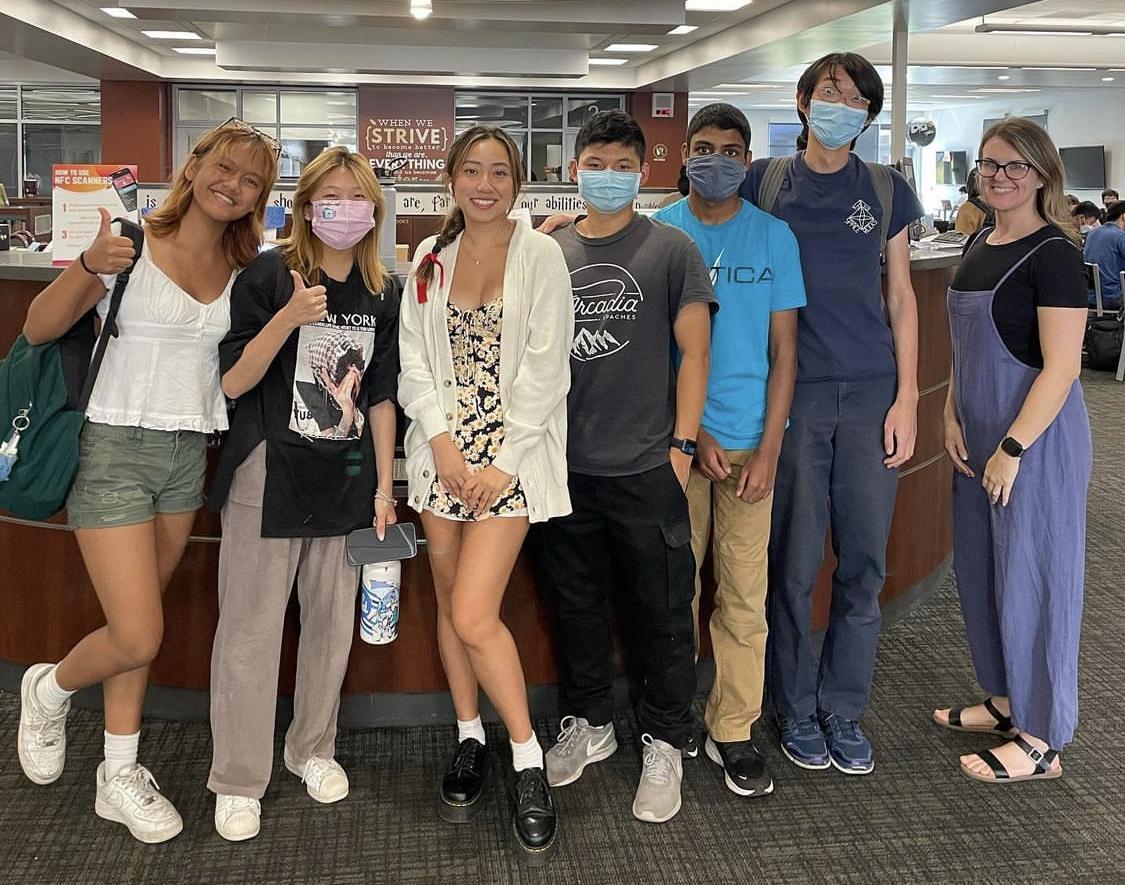 NFC allows for short-distance wireless data transmission, often utilized in mobile payments, such as Apple or Samsung Pay. The phone acts as an NFC tag that sends information to the NFC reader through radio waves.

“Throughout the pandemic, people became much more used to using this technology in stores, and in many cases, it has become second nature,” reflected Arcadia Unified Chief Strategy and Innovation Officer Greg Gazanian.

This idea of making students’ ID cards accessible on their phones came from Arcadia High School’s App Development Team. This team produced Arcadia High’s first-ever mobile app in 2017 and continues to maintain the app’s functions, as well as look for ways to expand its features and usefulness for its users. It was during a brainstorming session on how to improve user engagement in the Arcadia High app that the team discovered an area of opportunity.

“We thought about speeding up the lunch line because, currently, it’s really inconvenient,” Jeffrey Aaron, a junior at Arcadia High School and one of the captains of the App Development team, pointed out when speaking about the origin of this idea.

The inefficiency of the lunch line is often caused by students either forgetting their ID cards at home and having to punch in their ID numbers on the number pad. Additionally, given the free lunch services provided this year, students are more willing to line up for lunch.

Aaron explained that having the option to use a digital ID card speeds up the identification processes utilized throughout the Arcadia High campus, as students typically have their phones on hand, and scanning a mobile ID only takes a second. This would provide students with an alternative option that could lead to more efficiency at the counter and shorten up the line.

After finishing their primary testing of the NFC scanners at the library, the App Development team now aims to expand this beyond the library or even throughout the school district, such as the ASB office, cafeteria, and more. For example, Aaron elaborated, without the NFC scanners, students would have to tell the ASB counter their ID number, possibly having to repeat it and then have the staff type it out on their computer. But with the scanners, students would place their phones on them, and when the scanners turn green, the process is complete.

“Extending that ease of use to our school sites would be helpful,” said Gazanian. “Based on the results of the pilot, we will be able to explore using this technology anywhere where ID cards are required.”

To use this new program, students must first download the Arcadia High School App from the Apple Store or the Google Play Store. Next, students would have to sign in with their school-provided Google account and click “Scan for NFC” when one is ready to scan. Lastly, a student would place their phone on the lower half of the NFC reader. 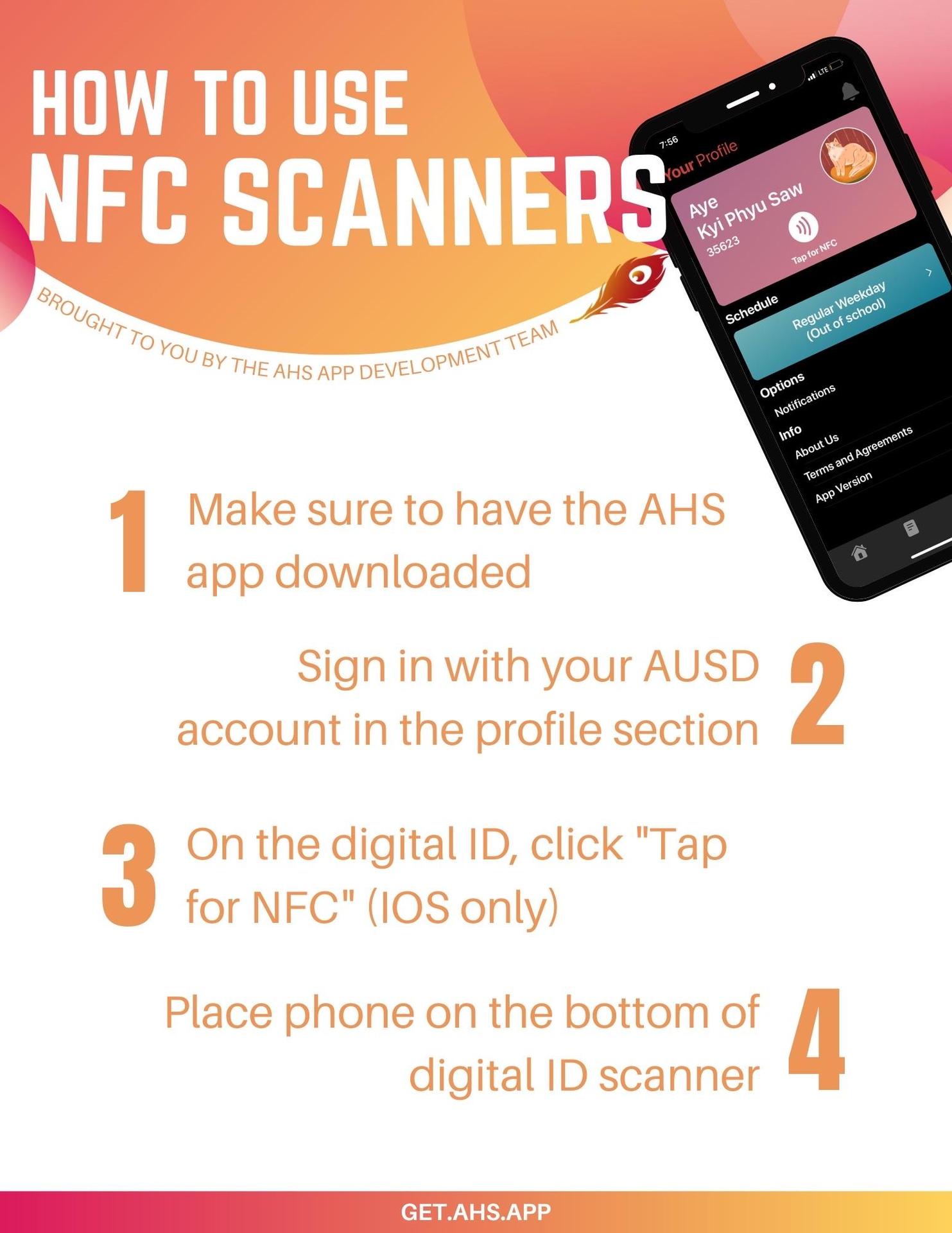 Instructional posters listing out steps to using the NFC scanners.

There are, however, always challenges when implementing new technologies like these.

Arcadia High’s App Development Team originally designed the code so it would work for Android phones. They soon realized that the app didn’t work with Apple phones as Apple's system blocked the usage of third-party NFC applications. The team realized it had to redesign its code for it to work on both operating systems.

“We had to completely redo the NFC reader framework and the code to support both Android and iOS,” recalled Aaron. "This also required us to rewrite part of the AHS app that contained NFC.”

In addition to redesigning the code, the team also had to incorporate security features to prevent people from misusing others’ student IDs. One such feature is the required Google sign-in to the Arcadia High School App. This allows the app to recognize who is using the NFC feature and ensures the correct student ID is being scanned.

“In order to use the ID cards, they have to sign in with a Google account,” stressed Aaron. “Then the app knows that it's your card.”

In the future, Arcadia High’s App Development Team is looking to employ this technology in smartwatches, such as the Apple Watch or the Galaxy Watch, as it will be another accessible way of using the NFC scanners.

“It's truly amazing the opportunities that we have at Arcadia, especially the fact that we can propose ideas to people in our administration and then improve the school in ways that most benefit the students,” celebrated Aaron.