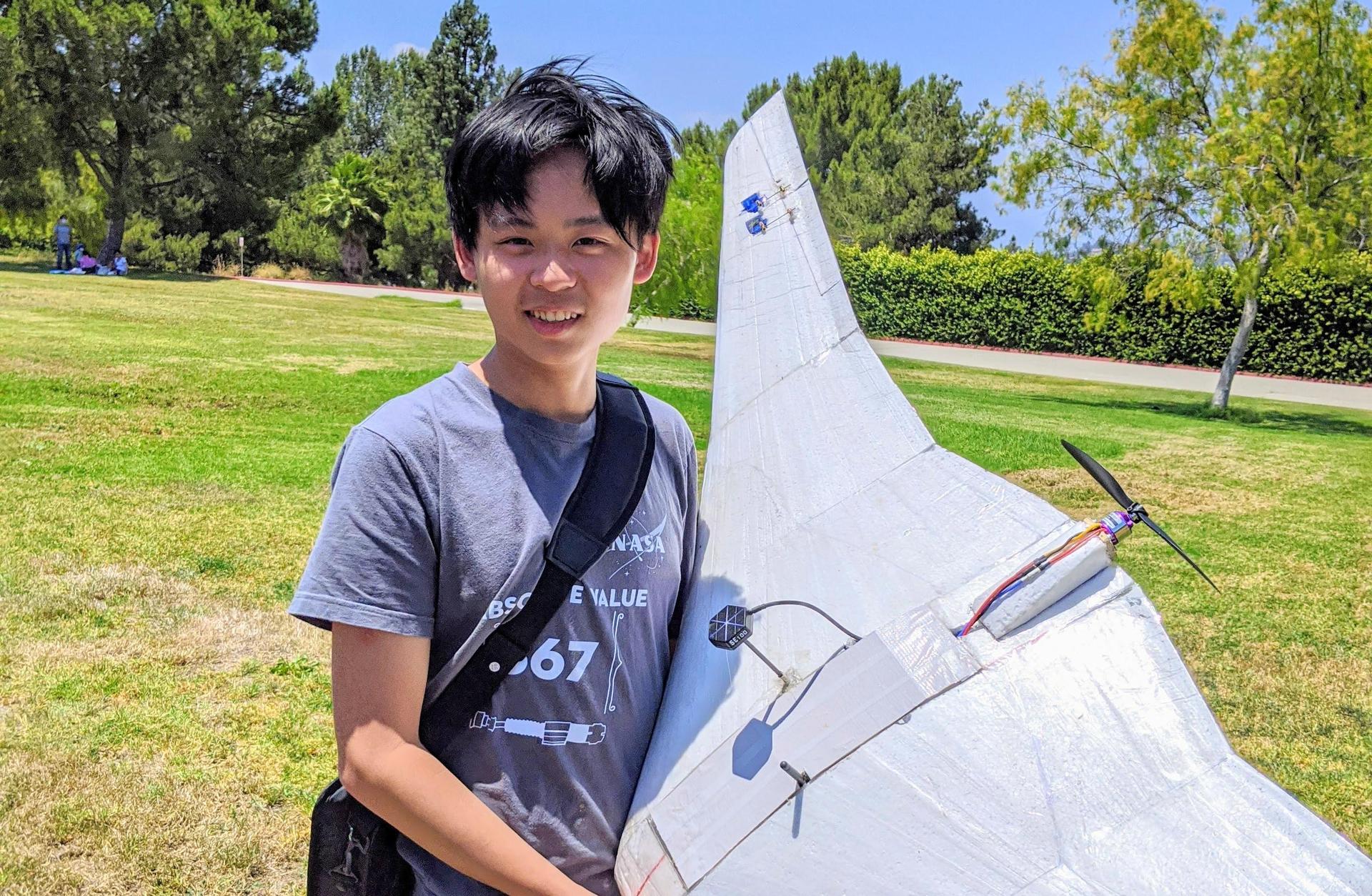 Arcadia High School junior Ethan Wong recently placed second in the category of Engineering Mechanics at the Regeneron International Science and Engineering Fair (ISEF), an annual event where high schoolers from around the world compete for recognition in various scientific and engineering fields. The 2021 ISEF was hosted virtually this year and saw nearly 2,000 students from 64 countries submit over 1,500 projects across dozens of different categories.

Ethan’s project (“Proverse Yaw Characteristics of a Powered Blended Wing Body Aircraft of a Novel Design and Manufacture”) featured a blended wing body aircraft with the ability to fly and turn stably. The project won Ethan a cash prize of $2,000. He was previously named an ISEF finalist in 2020, but due to complications from the pandemic, no students were able to compete. 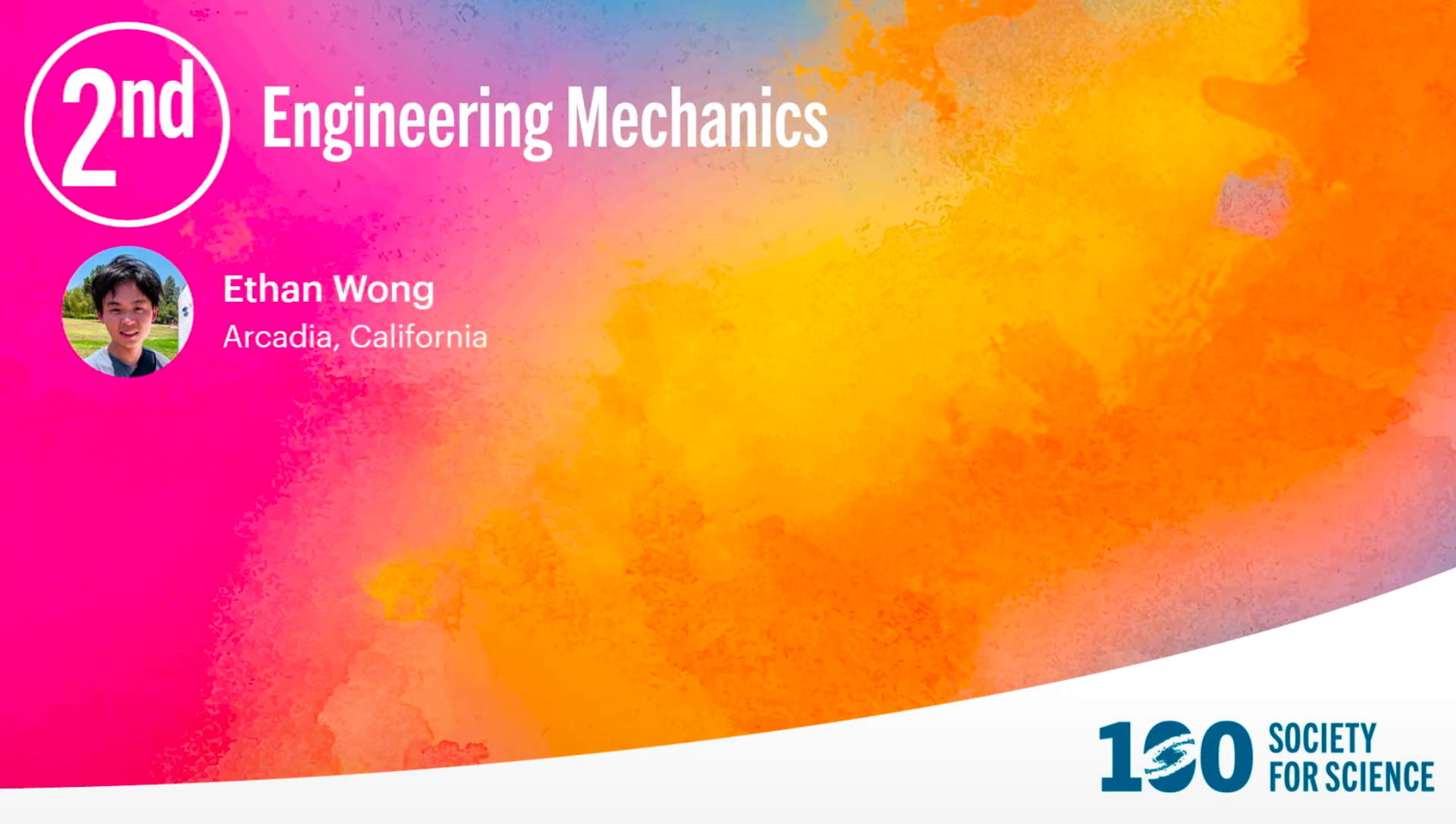 The ISEF Award Ceremony was held virtually this year due to the pandemic.


“My interest in mechanical engineering developed from constructing moving parts and structural components for my airplanes, which became increasingly intricate as I refined my designs,” Ethan said.

“I have come to appreciate mechanical engineering as a field that is essential to making my ideas feasible in the real world.” As for where his interest in aeronautics stems from, Ethan noted, “I find it fascinating that the aerodynamic forces we are oblivious to in everyday life can be harnessed through engineering to build vehicles that can fly.” 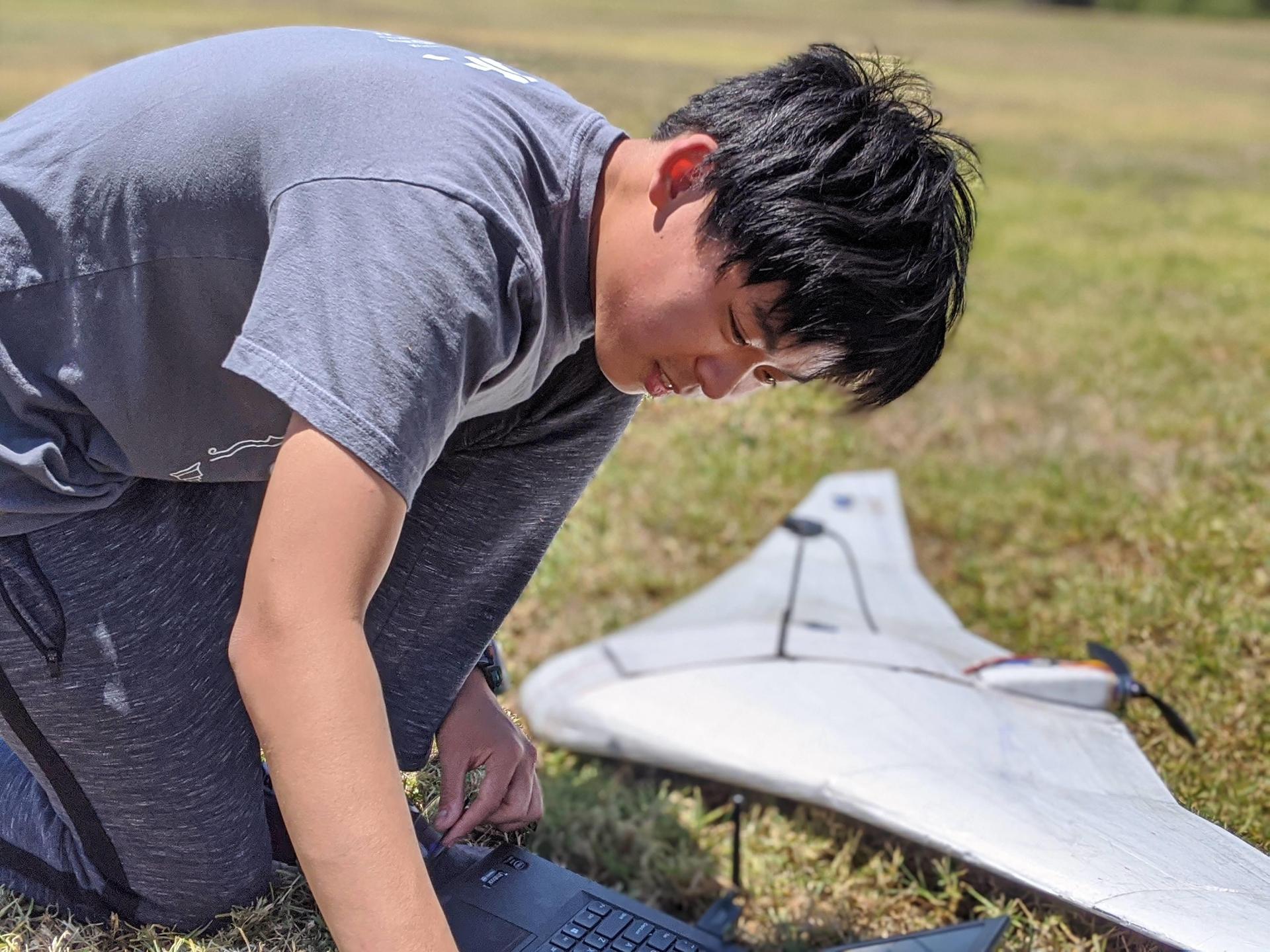 Ethan prepares his prototype aircraft for a test flight.

A subfield of aeronautical engineering that particularly interests Ethan is the design of flying wings; he has designed and built his own aircraft since middle school. Ethan typically constructs these flying wings in his garage using a homemade computerized numerical control foam cutter. He then flies his wings on open fields, placing a smartphone in the aircraft’s cargo bay to gather data. Because most of his flying wings are handmade, he tends to design them by trial and error, which is the chief process he used to refine his novel design.

His aircraft can perform coordinated turns without a rudder or other vertical surfaces, allowing for a more structurally efficient design. Ethan developed several iterations of the flying wing before he was able to settle on one to use for his science fair project.

“I probably crashed my flying wing a hundred times before it flew perfectly,” Ethan said. “However, I’m pretty satisfied with how my project this year turned out.” 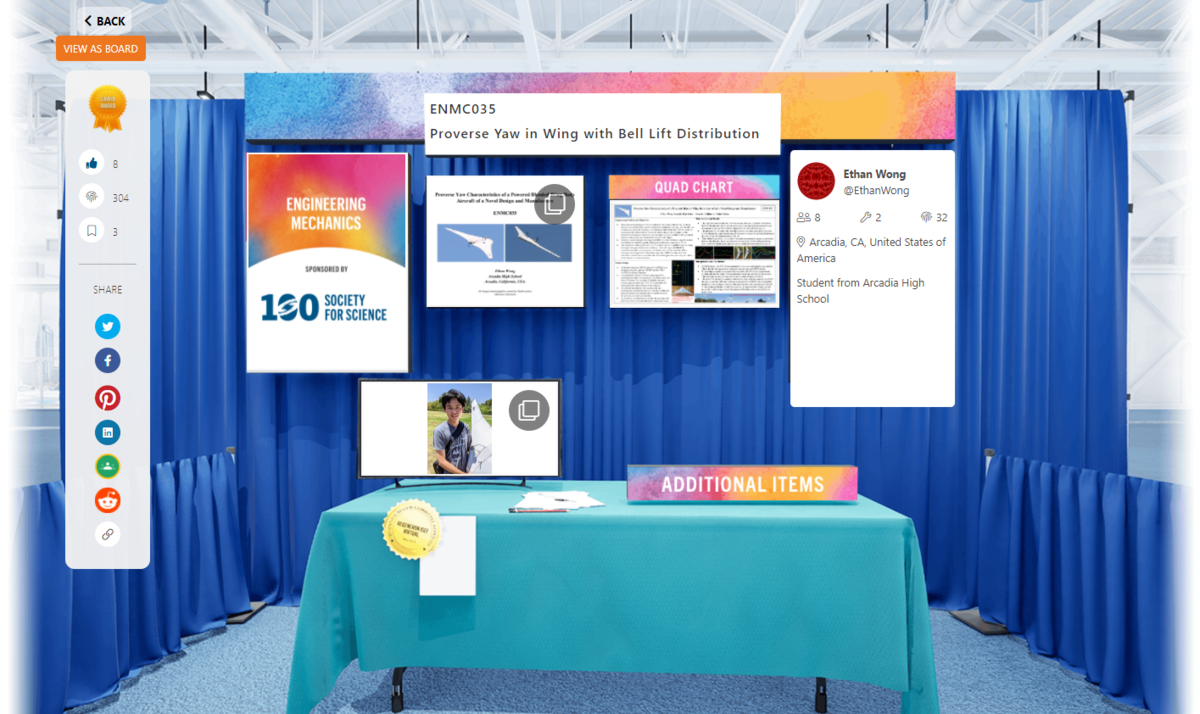 With the entire program conducted online this year, here’s a look at Ethan’s virtual booth for the Regeneron International Science and Engineering Fair.

But ISEF values more than just experimentation, according to Ethan. Knowledge of one’s material and public speaking skills also factor in. At most science fairs, students must organize their findings into a detailed, comprehensive report before being interviewed by several experienced judges. At this year’s ISEF, five different judging panels questioned competitors on the ins and outs of their projects. Many of these judges were experienced in the students’ respective fields, making it even more critical that their answers were detailed, accurate, and informative.

“The presentation is a really important part of the project,” Ethan said. “It’s where the judges get to see how you put all your information together and evaluate how familiar you are with the subject matter.”

He attributed his ability to create a strong report to his Arcadia High Advanced Placement (AP) Biology teacher, Craig Monden, who he had as an instructor his sophomore year.

“Over the summer before sophomore year, students had to make a report detailing the findings we gathered from an at-home biology experiment. I remember that Mr. Monden said that I gave one of the best presentations he’d seen in years, but I still ended up getting a C on the assignment. I figured out that I just hadn’t streamlined my report very well, and my use of the scientific method was unclear. That experience along with Mr. Monden’s feedback has helped me to develop my ability to write clear scientific reports.”

Before Ethan’s success at ISEF, he also competed in the 2021 California Science and Engineering Fair, which pools competitors from all over the state. There, he placed second in his category. Earlier this year, Ethan also entered the Los Angeles County Science and Engineering Fair, winning first place in his category and the Sweepstakes Award in the Senior Division. This means that his project was considered the best in the Senior Division, which encompasses all categories and competitors in grades 9-12. In years prior, Ethan’s science fair projects have also focused on aeronautics and the construction of winged aircraft.

He credited his Arcadia High EDD teacher, Bill Chapman, with helping him develop technical construction skills, many of which he applied to his ISEF science fair project.

“Before I took Mr. Chapman’s class,” Ethan said, “I barely knew how to use a drill.”

The class was held online this year, but according to Mr. Chapman, engineering is about “defining problems and coming up with new solutions to those problems,” and students were still able to learn a lot about engineering while focusing more on the design aspect. Ethan enjoyed competing in EDD’s virtual competitions, which further prepared him for the intense nature of the ISEF program.

To view this year’s list of ISEF winners, see this press release. For more information on Arcadia High School and its science and engineering classes, visit ahs.ausd.net. To learn more about ISEF, visit the fair’s website or watch Science Fair, an award-winning documentary detailing the experiences of nine contestants from the 2017 ISEF.