–Arcadia High has a Rose Princess, a Marching Band and Color Guard Performance, and More– 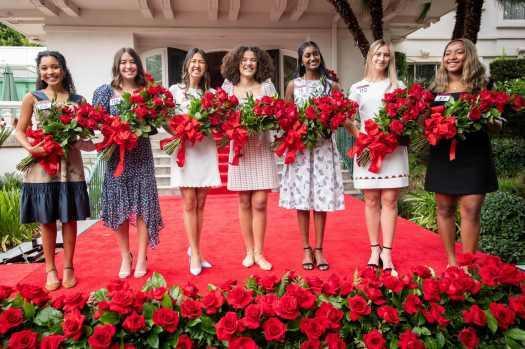 Arcadia High Senior Swetha Somasundaram, third from the right, is one of seven members chosen to be part of the 2020 Royal Court.

Nearly 200 Arcadia High School students will march bright and early down a 5.5 mile stretch on Colorado Boulevard alongside 37 floats and 60,000 roses in the 133rd annual Rose Parade. This famous New Year’s Day parade, taking place on Saturday, Jan.1, 2022, has a special Arcadia connection, as there is a Rose Princess from Arcadia High, Swetha Somasundaram, Arcadia High’s acclaimed Apache Marching Band and Color Guard, and eight total Arcadia girl scouts and boy scouts who are set to share the stage with the Marine Corps Band, China Airlines Float, equestrian units, and more.

Members of the Tournament of Roses’ Royal Court, which first started in 1905, are chosen through a very competitive and selective process. It begins with a series of four interview rounds—the first round allowing applicants only 15 seconds to explain their desire to join the Royal Court. Through the remainder of the process, the initial 400 applicants are narrowed down to only seven Royal Court Members. Applications are open to all females between the ages of 17 and 21 who have a 2.0 GPA or higher and who are residents of the Pasadena Area Community College District. Court members are chosen based on a wide range of qualities, including leadership, public speaking, academics, and community and school involvement.

Of the 29 finalists for the 2022 Royal Court, five were from Arcadia High School, with Arcadia High’s Swetha Somasundaram chosen as one of this year’s seven-member Royal Court.

On October 4, Swetha Somasundaram was crowned as a Rose Parade Princess.

For Somasundaram, becoming a Royal Court Princess was a long-held dream. She remembers watching the Royal Court at events and seeing the Court Princesses wave from their float, aspiring to one day welcome the New Year’s crowd herself.

“Ever since the first time I watched the Rose Parade, the Tournament of Roses and the Royal Court have a very special place in my heart,” Somasundaram shared.

“Now, every day I walk into the Tournament House, a wave of happiness and gratefulness rushes over me because of how wonderful the work we do is.”

Apart from participating in the Rose Parade, Rose Court members play an integral role as ambassadors of Pasadena and their respective cities. The Court hosts meet and greets and participates in community service work. One of their first service events was helping detag and distribute clothes donated by Forever 21 to domestic violence victims. In addition, the girls underwent rigorous preparation for their role on the Royal Court, which included a two-week period of nearly five hours each day spent in media/speech, leadership, and etiquette training.

Just as COVID-19 guidelines have altered people’s normal routines, COVID-19 regulations have impacted Royal Court traditions. Navigating through the first Rose Parade since the pandemic started, the Court has begun finding new ways to follow customary etiquette while abiding by safety protocols. One example, Somasundaram explained, is “swapping out shaking hands for a hand clasp and bow of the head.” She added, “We are definitely the first court to wear matching masks!”

For Somasundaram, what’s most special about being a part of the Royal Court is sharing the title with a diverse group of her peers on the court that integrates various cultures and heritages into all aspects of their community service. She noted, “So many people of my community were truly excited that I was chosen as a Royal Court Member because I represent them.”

As a Rose Princess, Somasundaram has the power to impact thousands, if not millions, of worldwide viewers.

“I hope to inspire and be a role model to everyone watching me, especially to the little girls who are watching me the way I looked up to previous courts,” said Somasundaram.

Joining Somasundaram are her Arcadia High peers in the Tournament Troop.

The Tournament Troop is composed of a special group of Eagle Scouts and Gold Award Girl Scouts from the Greater Los Angeles region and is entrusted with leading the Flag Ceremony at the start of the event and carrying banners announcing award-winning floats. 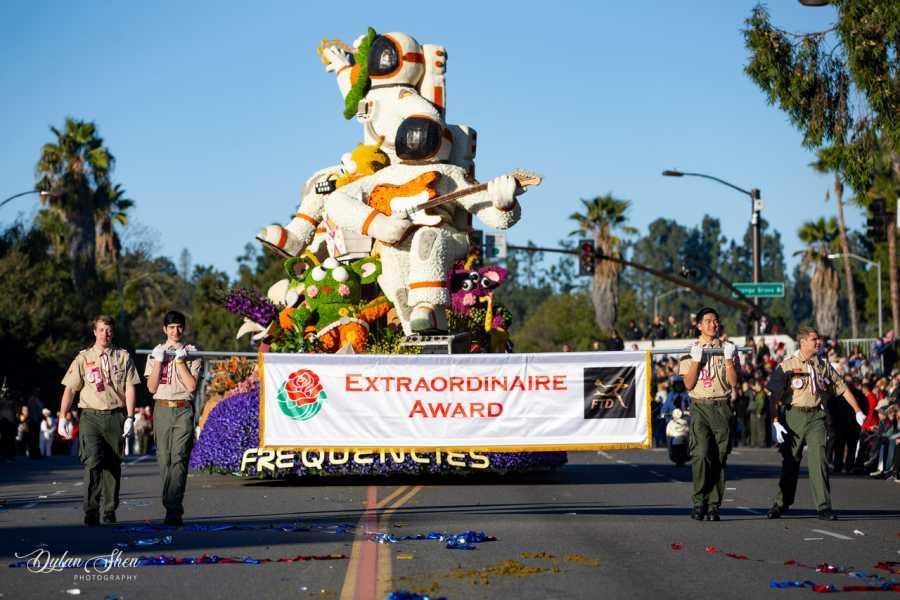 Members of the Tournament Troop are responsible for carrying flags that display the award-winning floats.

Arcadia will have eight troop members at the 133rd Rose Parade. Though the troop is typically only high school students, the class of 2021 seniors who missed their chance to participate in the previous parade, including Arcadia High seniors, are also invited.

Building on Arcadia’s impressive representation in the 2022 Rose Parade is Arcadia High’s Apache Marching Band and Color Guard, who will be performing in the parade. This will be the group’s 17th appearance in the Rose Parade.

This performance builds onto the Apache Marching Band and Color Guard’s long and decorated history. Arcadia High students have performed at the Pearl Harbor Memorial Parade in Hawaii, the 2005 Presidential Inauguration Parade, and more recently, at the new $5 billion SoFi Stadium during a Chargers Game Halftime Show.

Every four years, the band submits an application so all students have the chance to perform in the Rose Parade during their high school career. The Rose Parade band lineup is decided based on factors including musicianship, marching ability, uniqueness, and more. With the Apache Marching Band and Color Guard’s success in local and regional marching events, it is one of the most regularly accepted bands.

Due to tight pandemic mandates to start the 2021 New Year, the 2021 Rose Parade was canceled, but thankfully for the Apache Marching Band and Color Guard, their invite to perform in a future parade was not. Class of 2021 seniors who missed their opportunity to perform were also extended an offer to join the band for the 2022 performance. As the Arcadia High Apaches march down the streets of Pasadena this New Year’s Day, they will be joined by nearly 20 alumni.

One of the returning seniors is Justin Wu, 2020-21 drum major. To accommodate for the two participating drum majors, the Apache Band made a slight adjustment: it will be led by both Wu and current 2021-22 drum major, Elise Fong.

“I feel very honored to march alongside him,” expressed Fong when speaking about the performance modification.

“I'm just super excited and grateful for this opportunity to be able to have one last hurrah with the band who I consider to be some of the most amazing people and my family,” Fong reflected.

Returning from a fully online 2020-21 school year, the band’s upcoming performance is extra special. At the start of the current school year, 50% of the students had never participated in a high school marching band in person—a stark comparison to the usual 25%.

“Despite a catch-up learning curve, the students worked hard to overcome the challenges and develop an award-winning show and retained our standing in the area,” Band Directors Kevin Sherill and Thomas Plunkett shared.

The band’s performance at the Rose Parade will not only be a culmination of the hard work the students put in this year, but also a reflection of the support from staff both present and past. On top of direction received from Sherill and Plunkett, retired Arcadia Unified School District band directors Tom Landes, Mike Danielson, and Tom Forbes have also returned to help.

“After a time when all students had their education disrupted in some way or another, celebrating our teachers, friends, peers, and the front-line workers who ensured we could be safe and comfortable to reopen and function as a whole society again is super important,” shared Somasundaram.

For her and many others, participating in the 2022 Tournament of Roses, dedicated to its theme that was crafted specifically to celebrate education, “Dream. Believe. Achieve.”, is the perfect way to honor these heroes.