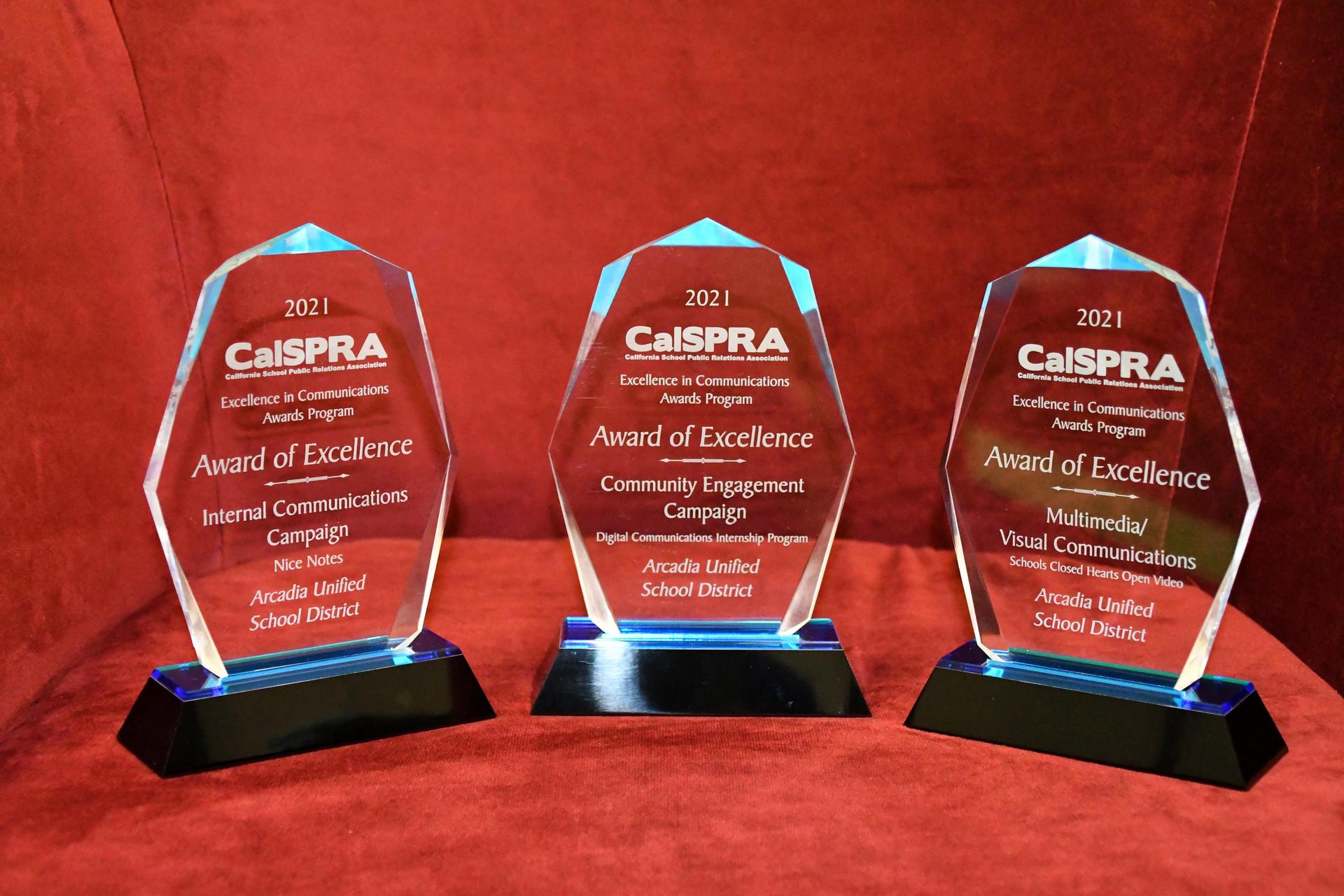 
CalSPRA, a statewide, nonprofit organization that exists to promote better public understanding of, commitment to, and support for public education, hosts an annual Excellence in Communications Awards program that recognizes superior achievement in meeting strategic goals through high-quality communications and public relations initiatives.


The “Award of Excellence” is the highest distinction available, and Arcadia Unified’s three Awards of Excellence this year fell under the following categories: Community Engagement, Multimedia/Visual Communications, and Internal Communications. Awards were presented at CalSPRA’s all-virtual 2021 annual conference.


“There is an overwhelming amount of support from our Arcadia Unified Board of Education, Superintendent, and entire district for keeping our staff, students, and families informed and engaged, which is what makes the success of our Communications and Public Information Office here in Arcadia Unified possible,” said Foran.


“Programs, like DCI, our internship program at Arcadia High, which helps amplify student voice and expand our ability to celebrate the success stories of public education in Arcadia Unified, would be impossible without this district’s commitment to communications.”

While Foran noted that communications is a district-wide, team effort, his department’s immediate team consists of Public Information Officer Amber Nuuvali, who joined Arcadia Unified in 2017 and helps co-manage the DCI internship program, and the DCI interns.

“Amber has been a wonderful fit for the team and has been a great example of positivity and professionalism for our interns. Having sent nearly 50 Coronavirus Updates, having Amber in the department has been beyond essential through the pandemic. With her here to support, we were able to continue to run the internship program, while developing new communications strategies, such as our Nice Notes positivity campaign,” Foran said.


Arcadia Unified’s 2021 CalSPRA Awards of Excellence At a Glance 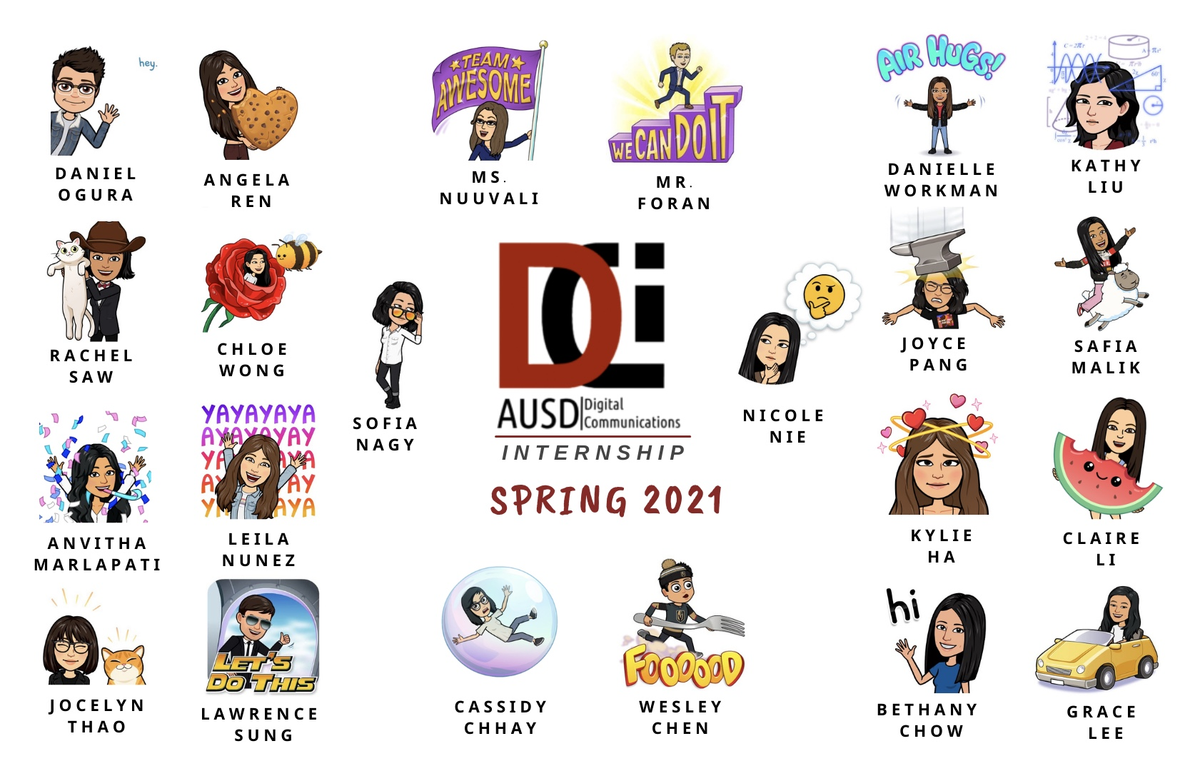 Bitmoji is a must for Arcadia Unified DCI Interns

The  Arcadia Unified Digital Communications Internship program was created in the Spring of 2015 and is an integral part of Arcadia Unified’s Communications and Public Information Office. Starting with just one intern, Arcadia High Class of 2017’s Travis Chen, DCI has grown exponentially, shared Foran. Some semesters, the program has had more than 40 interns, with 20 interns in the most recent Spring 2021 program. DCI interns help cover the many events that occur districtwide, using different digital communications tools, such as photography, videography, podcasting, news writing, and more, to help tell the stories of Arcadia Unified’s students, teachers, and staff. They also cover stories that highlight the support the Arcadia community gives to the district’s students, staff, and schools.

“Arcadia High students are the absolute best, and being able to work with them through DCI is one of the best parts of my job,” said Foran.

Foran also noted that it has been great helping his colleagues in other districts throughout the country start their own internship programs, which he has done by giving numerous conference presentations and speaking one-on-one with other school PR professionals about how he started and maintains Arcadia Unified’s DCI.

While Foran shared that morale and mental health and wellness are always a top priority for the district, it quickly became evident that both would be paramount when schools first physically closed. He and his team created the hashtag “#SchoolsClosedHeartOpen” to help remind Arcadia Unified’s community of teachers, staff, students, and families that their togetherness could continue to happen despite the distance. Foran compiled posts from the #SchoolsClosedHeartOpen hashtag to create an inspiring Spring 2020 semester video recap, which has nearly 3k views on YouTube, showcasing the good happening in spite of the difficult challenges brought on by the pandemic. 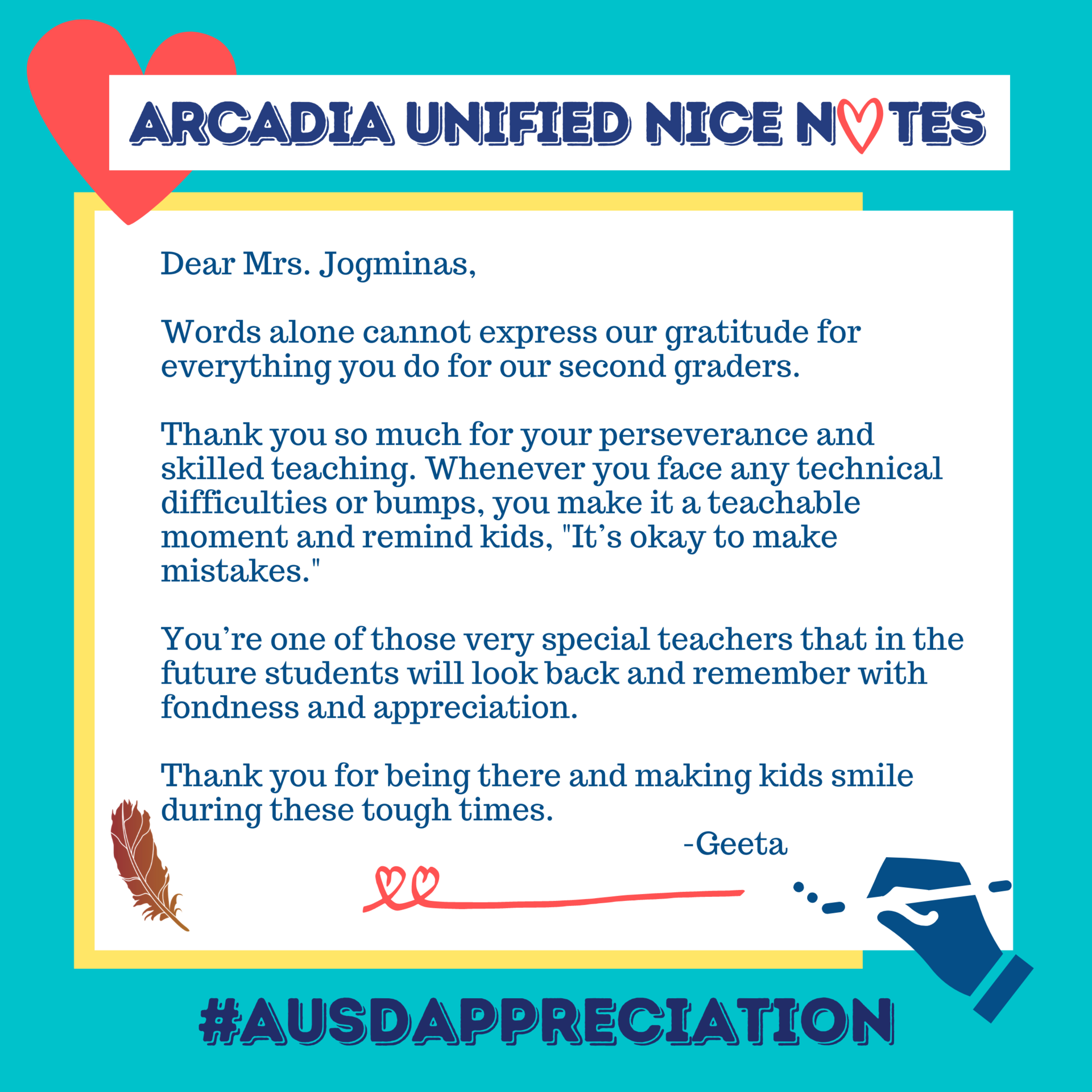 When asked about the inspiration for the Arcadia Unified Nice Notes campaign, Foran explained that every single positive word has the power to change someone’s day. The stress of refining and delivering quality instruction entirely virtually and managing the pandemic personally for people began taking its toll.

“Principals would email our executive team positive emails they received from parents and families who expressed their gratitude for teachers, food service employees, and more, and I wanted to share these uplifting messages with our entire district to help spread positivity.”

Nice Notes became another inspiration, similar to the Digital Communications Internship, that other school districts from around the state saw via social media, prompting them to use the same concept to help spread positivity and kindness and quell the impacts of the pandemic in their own schools.

This is not the first time Arcadia Unified has received such statewide recognition for its efforts in communication. CalSPRA’s 2020 Awards program saw Arcadia Unified with an Award of Excellence in Media Relations, as well as an Award of Merit for its Digital Education Station series, which features interviews and updates regarding district initiatives and programs, such as the Leader in Me program in Arcadia Unified elementary and middle schools and Restorative Practices, to name a couple of topics.

Arcadia Unified’s DCI interns also garnered recognition among CalSPRA PR pros in 2017 by winning an Award of Excellence in CalSPRA’s Multimedia/Visual Communication category for their humorous and informative  “DCI Chromebook Care Video.” After completing a three-year, 1:1 technology rollout, where every student and teacher in Arcadia Unified received their own Chromebook for schoolwork, the number of repairs being made to the devices was higher than anticipated for the roughly 10,000 Chromebooks distributed throughout the District, explained Foran. This prompted the need to get the word out about several simple but important tips and techniques to care for Chromebooks.

Likewise, in 2018, Arcadia Unified DCI interns received further recognition with a CalSPRA Award of Merit for the Keepin’ It Arcadia podcast, a student-run podcast that shares stories and information from across the district and Arcadia community. Currently in its fourth season, episodes have covered “Behind the Scenes of the Return to School'', “The History of our City and Asain American Identity in Arcadia and America”, and “The Choosing and Creating of Classes at Arcadia High”, to name a few. The Keepin It Arcadia podcast is available for free streaming on Apple Podcasts, Podbean, and Spotify.

“It is a pleasure to honor Arcadia Unified with these awards,” said CalSPRA President Matthew Jennings. “Effective communication connects our communities to our classrooms and builds support for quality learning environments. Arcadia Unified continues to lead the way throughout our state and inspires so many of our education colleagues in our country with creative, meaningful, and impactful public relations strategies to help our parents and stakeholders better understand and support public education.”

"It's more important than ever that schools share our stories, to help parents connect with their children's schools and to help taxpayers see how districts are spending their precious resources. Especially this past year during the pandemic, where the critical importance of constant and effective communications was made abundantly clear. CalSPRA’s Award of Excellence winners are at the top of their class, successfully building support for and creating an understanding of our public schools," said CalSPRA Past President Jennifer Dericco.

CalSPRA is home to over 400 school public relations and communications professionals from school districts, county offices of education, and other educational institutions across the state of California. Each member is eligible to submit project entries for the CalSPRA awards program. Entries are judged by communications professionals outside of CalSPRA to avoid conflicts of interest and bias.