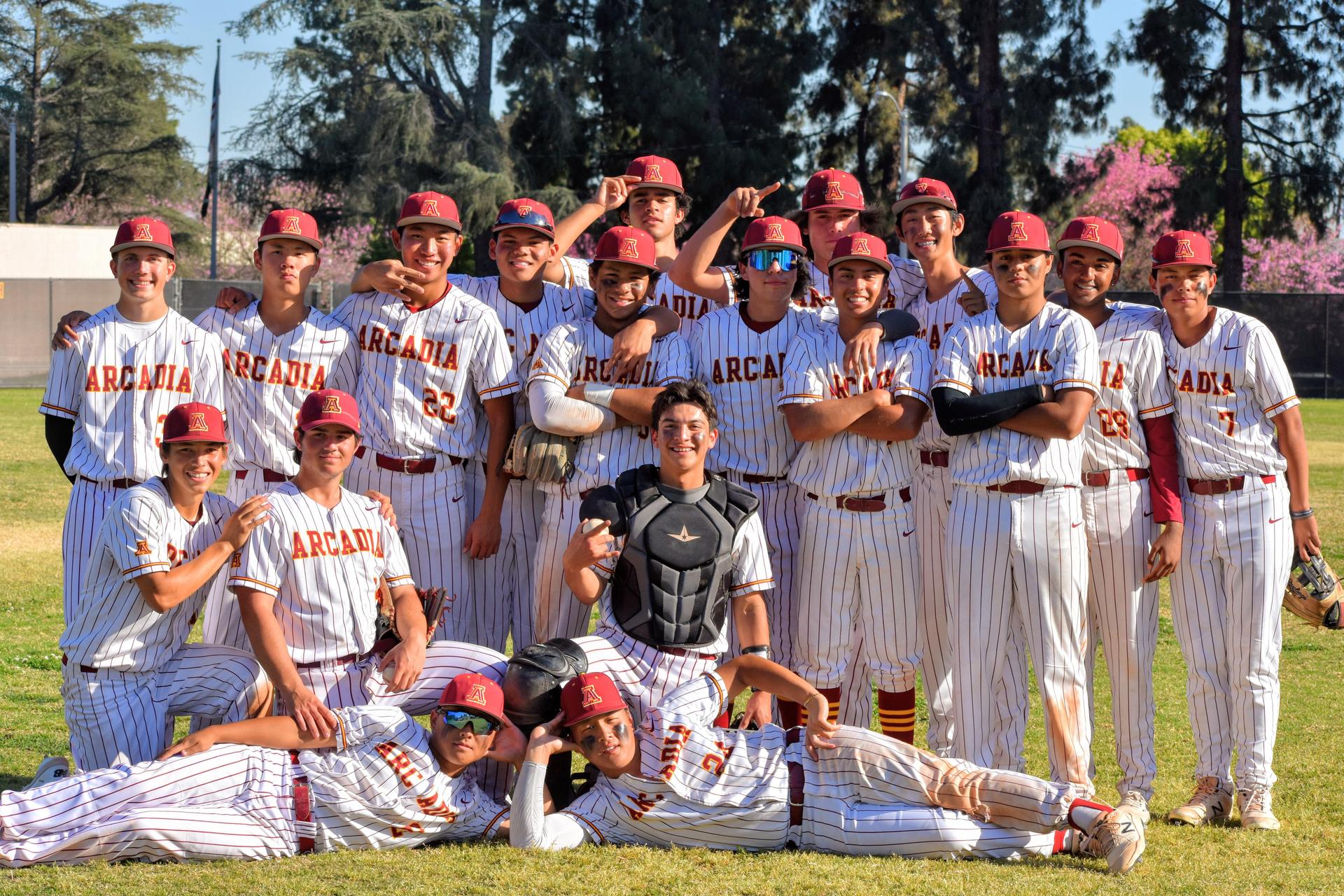 Arcadia High Baseball team after its win against Glendale High

The Arcadia Apaches Varsity Baseball team is currently dominating in every facet of the game. With its skilled pitching staff, consistent hitting, and lockdown defense, the Division 1 team sits with a record of 13-4 and is currently undefeated in Pacific League games.

Aside from the team’s impressive all-around play, what makes this season stand out particularly is the lineup, which is composed of mostly seniors. With this being the last season for many of the student-athletes, it serves as extra motivation to win and to cherish every single game.

“The last time we played together as a team was freshman/sophomore year, which was a very fun year, so having us back together again brings the good memories back,” reminisced Alex Dolan, Arcadia High senior and second baseman.

“The people on this team are well-connected because we’ve known each other since we were really young, like elementary [school]. This builds chemistry because we’re like brothers,” said Dolan.

The team’s level of play on the field goes beyond the typical baseball skills and seems to stem from the invaluable connections and friendships forged off the field that translate to its success.

Dolan elaborated on the team’s mentality and the importance of supporting one another, stating, “There’s no point if I’m doing good if no one else is doing good. Baseball is a team sport. I can’t win a game by myself.” 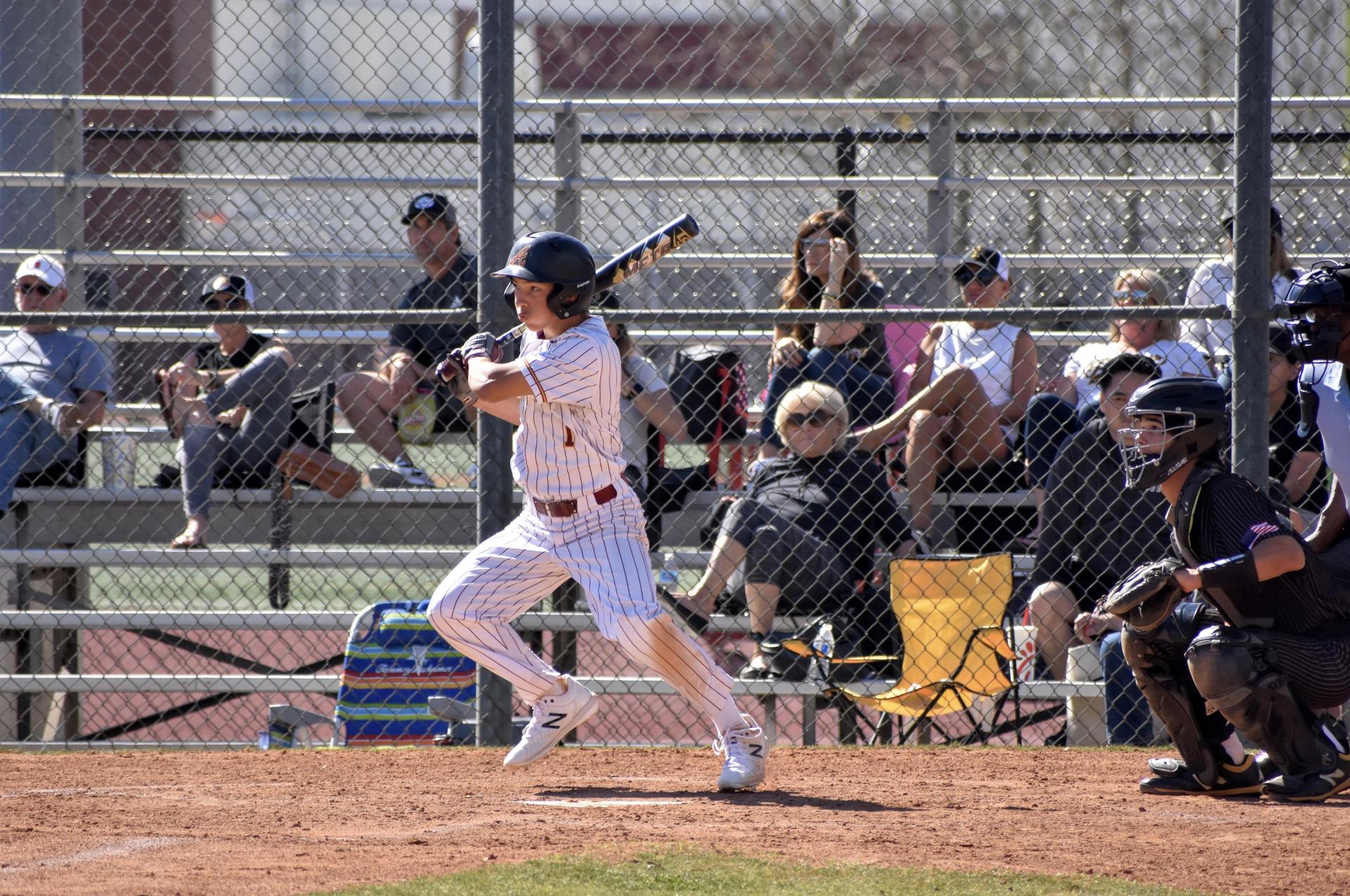 Alex Dolan, number 1, getting a base hit against Newbury Park and went 2-3 for the game

Dolan has been a part of the Arcadia High School Baseball team for the entirety of his high school career, and he’s developed a notorious reputation as the team’s speedster. He is an absolute menace on the base paths, his incredible speed distracts the opposing pitcher by forcing the pitcher to constantly throw pick-off attempts, while simultaneously pressuring the defenders to make quick plays, often leading to the other team making costly errors. This gives the Apaches a great advantage as they can rely on him to frequently be in scoring position, making him the best fit at the top of the lineup.

“I create so much trouble as a leadoff man because if I do get on base, I am a threat to steal,” explained Dolan. “I would be able to score and go home on a base hit. It's the problem of being too fast”

Dolan’s speed also comes in handy with his fielding game.

“I have really far range. I can pretty much catch anything and do anything because of my speed,” elaborated Dolan.

With a batting average of .380 (getting a hit 38% of the time), his ability to consistently get hits and get on base cannot be understated. He sets the tone and builds momentum for his entire team and builds confidence for the batters behind him.

“I need to get the team going, it’s the job of the leadoff.  If I get a hit, the chance of the other guy getting a hit behind me goes up even higher,” said Dolan.

The team’s game is to simply have a patient approach at the plate and pass the torch along. They may not have a standout, power-driven offense, but they have the mindset to score enough runs each game to get the win.

“Our game is scrappy, like the Sandlot,” reflected Dolan. “We aren’t home-run hitter guys. Even though we have a total of three home runs on the season, that’s not who we are. We get base hits and get the next guy up,” Dolan noted. 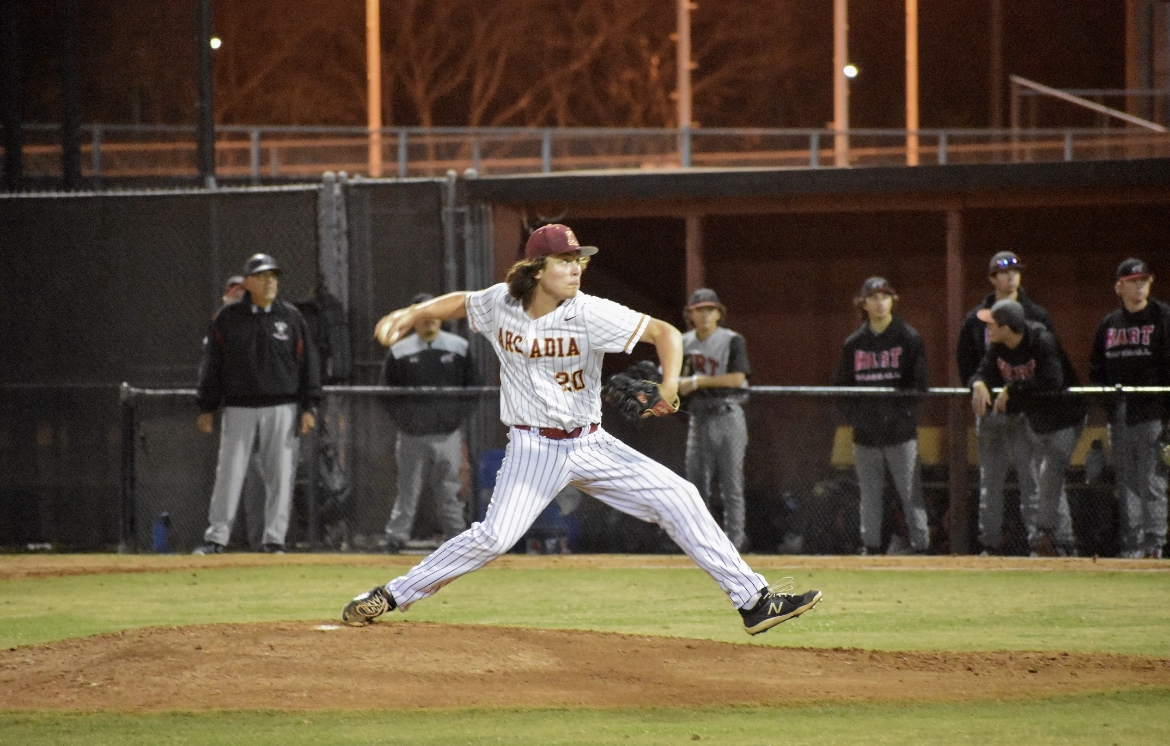 Another factor contributing to the Apaches’ recent success this season is junior Ian Hoffstetter, a right-handed pitcher and 1st baseman, who recently transferred to Arcadia from Gabrielino High School.

“The reason for the transfer was because of the Cross Age P.E. program at Arcadia,” Hoffstetter shared. “We go out to elementary schools and we teach P.E. to little kids, it’s a very fun experience,” said Hoffstetter.

With an ERA (earned run average) of 1.10 on the year, Hoffstetter is an incredibly valuable asset to the team, hardly giving up any runs and consistently putting zeros on the board. The rising star has become instrumental to the team’s pitching staff and spectacular season, with a record of 6-1. Though Hoffstetter has reached great heights, he only began pitching in high school this year and attributes his newfound success to a new team and a positive mindset.

“I try to do the best that I can,” Hoffstetter said. “I don’t get too caught up in how well I want to perform. I just make sure before every single pitch I am thinking about location and how I am going to execute.”

He continued on to describe how the catchers on the team help to enhance his abilities, stating, “Both my catchers this year, Ari [Nurhadi] and Julian [Gutierrez], have done a really good job blocking in the dirt, framing, and also pitch calling. My new changeup has really been working for me,” explained Hoffstetter.

With a fastball that sits at 83-85 miles per hour, an electric slider, and a nasty changeup, his pitch arsenal is diverse—and it shows. Hoffstetter has an amazing ability to keep hitters guessing and off-balance with batters hitting only .162 against him.

The entire pitching staff as a whole has done a phenomenal job of keeping opposing lineups quiet. With a rotation consisting of Ian Hoffstetter, Daniel Chavez, Gabriel Lopez, and Nicholas Choy, the Apaches are never an easy matchup.

Sophomore standout pitcher Gabriel Lopez credits the team’s impeccable results to simply being confident, explaining, “Our key is walking out there knowing that our stuff is good and that we can overpower anyone with a pitch. Confidence is all we need.”

Lopez added, “It doesn’t matter what happens, as long as we win every pitch and go out and compete.  Our goal this year is to win [Pacific] League absolutely, and to make a deep run into the playoffs.”.

The combination of superb hitting and pitching not only makes the Arcadia High School Baseball team a force to be reckoned with but one primed for many more victories in the future.

For updates on the team and the games, be sure to check out the Apaches Baseball Team on Twitter at @ArcadiaBaseball.