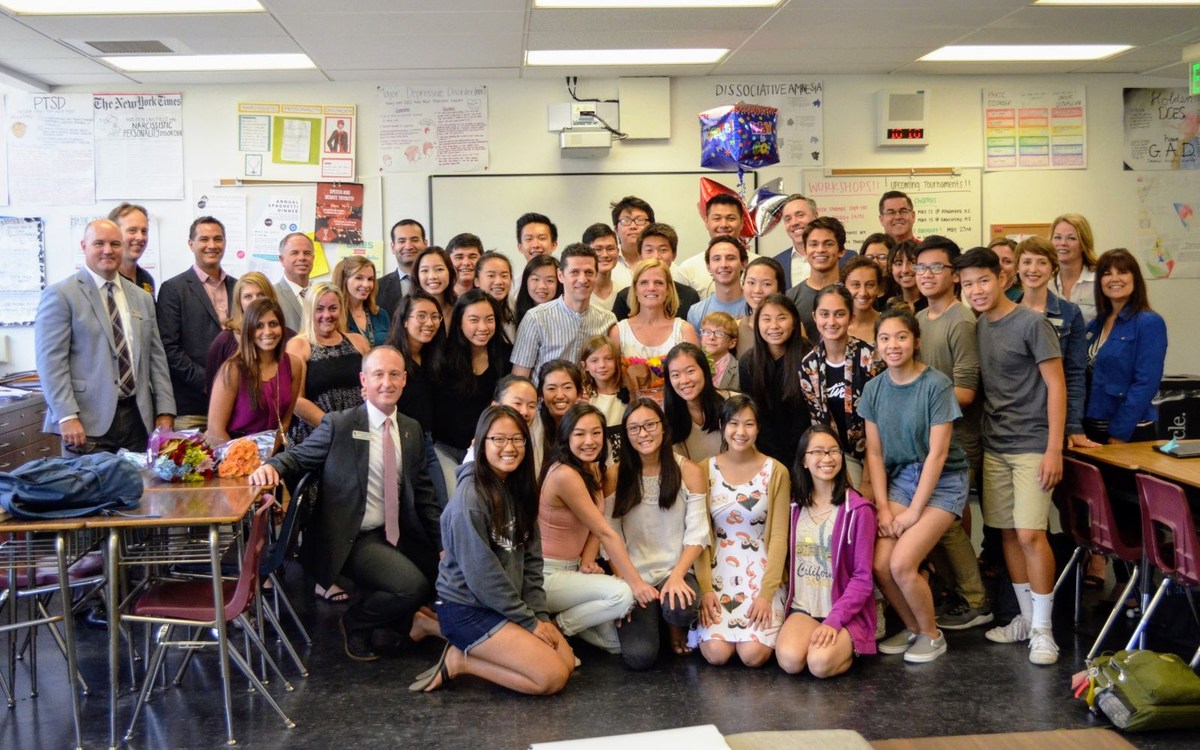 With the 2016-2017 school year coming to a close, the Arcadia Unified School District is beginning to look ahead, recently choosing Arcadia High School Speech and Debate coach and Sophomore Honors English teacher Ashley Novak as its 2017-2018 Teacher of the Year. There are over 400 outstanding educators in Arcadia Unified, which means being selected as Teacher of the Year is no small feat.

To announce the exciting news, Arcadia Unified's Superintendent Dr. David Vannasdall gathered colleagues, friends, and family, including Novak’s husband, Josh, and 7-year-old twins, Izzy and Willow, to join in a surprise visit to one of Novak’s classes. Jubilant applause, warm hugs, and joyful tears filled the room as Superintendent Dr. Vannasdall revealed Novak as the 2017-2018 Arcadia Unified Teacher of the Year.

“People don’t care what you know until they know that you care,” said Superintendent Dr. Vannasdall as he shared the defining characteristics that make a Teacher of the Year. “When surveyed, students’ favorite teacher has not been the easiest teacher, but rather the teacher who believes in them and pushes them beyond what they ever thought was possible,” explained Superintendent Dr. Vannasdall. “That’s the magic that we call ‘teaching.’”

Novak’s magic is undeniable. From leading hundreds of students to speech and debate success to working as a Teacher on Special Assignment to serving as Area Chair for the California High School Speech Association for five years, just to name a few of her roles, Novak’s commitment to her students and to excellence in teaching is apparent. “I was really fortunate to have that epiphany so early on,” recalled Novak regarding the moment in her senior year of college that she knew she wanted to be a teacher. “I know sometimes you never get it [the epiphany], so I’m just really fortunate to have had it.”

One fateful afternoon, Novak was asked by a colleague to join her for lunch at Arcadia High School. Despite having no intentions of leaving her teaching role at Roosevelt High School in East Los Angeles, from Arcadia High’s witty club posters to a vacant Speech and Debate Coach role, Novak was sold. That same day, she trekked across campus to the District office to pick up an application, and two short weeks later she was hired, reminisced Novak.

18 years later with Arcadia Unified, Novak still loves what she does. “The hard moments are really hard, but the joyous moments outshine everything,” expressed Novak.