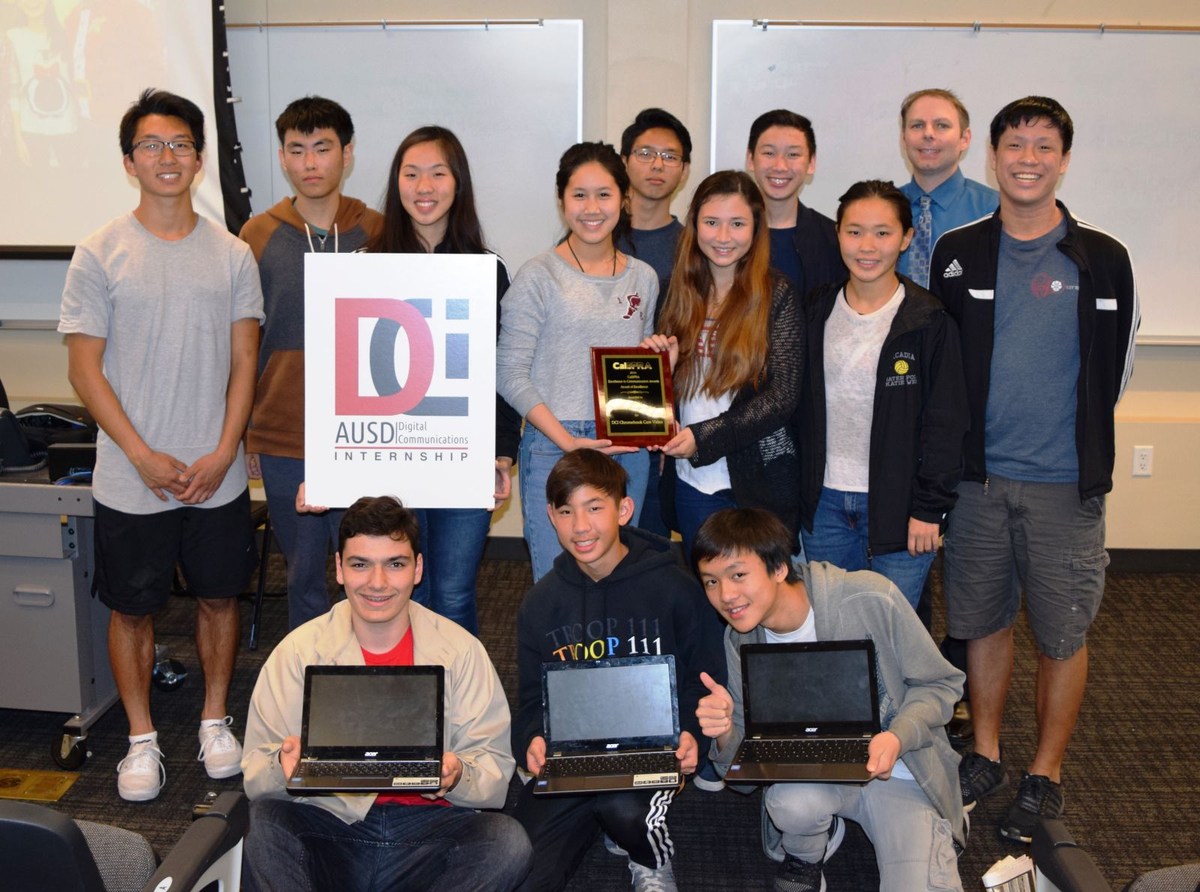 A group of talented Arcadia High School students is honored with a prestigious communications award that is typically reserved for seasoned public relations professionals. The Arcadia Unified School District and its Digital Communications Internship (DCI) program were recently honored by the California School Public Relations Association (CalSPRA) at its annual awards dinner held in Sacramento. Arcadia Unified’s DCI students received an “Award of Excellence” in CalSPRA’s Excellence in Communications program.

“I am beyond proud of the job our students did on this project, and am grateful that CalSPRA recognized them for their very creative and important work,” said Arcadia Unified School District Public Information Officer Ryan Foran who created and oversees DCI. “This was a major project that we spent a lot of time on, and more importantly, it will save our district money and afford more students access to Chromebooks and technology.”

The “Award of Excellence,” the highest distinction available, was earned in the Multimedia/Visual Communication category for the creation of “DCI Chromebook Care Video.” After completing a three-year, 1:1 technology rollout, where every student and teacher in the district received their own Chromebook to work with, the number of repairs being made were higher than anticipated for the roughly 10,000 Chromebooks distributed throughout the District.

“We needed to get the word to our students about a few simple but important tips and techniques that would reduce the number of repairs we were making to the Chromebooks,” explained Arcadia Unified’s Chief Technology Officer Scott Bramley. “I’ve seen the impressive work produced by DCI, and knew they would do a great job with this project.”

DCI turned the challenge into an opportunity and created a very informative yet entertaining video about proper Chromebook care. The video, which has well over 2,000 views on YouTube, was sent to all AUSD parents, students, and teachers, and was also watched and discussed in classrooms throughout the District.

After the release of the video, damage reports significantly decreased.

"It's more important now than ever that schools share our stories, to help parents connect with their children's schools and to help taxpayers see how districts are spending their precious resources. CalSPRA’s Award of Excellence winners are at the top of their class, successfully building support for and creating an understanding of our public schools," said CalSPRA President Music Watson.

CalSPRA is a nationally recognized leader in school communications that promotes better public understanding, commitment, and support of public education through effective communications.