Arcadia Stage’s Unforgettable Production of Charlie and the Chocolate Factory 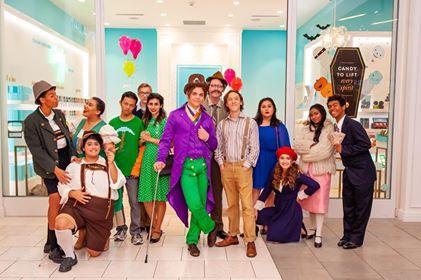 All 1,163 seats in the Arcadia Performing Arts Center (PAC) were completely filled for the second performance of Arcadia High School’s fall production of Charlie and the Chocolate Factory.

Surrounded by a sea of theater-goers, children, parents, students, and faculty were spotted with tickets in hand, eagerly waiting in line to see the much-anticipated show. As the doors of the PAC opened, theater seats were filled and nostalgia permeated the air for many.

Charlie and the Chocolate Factory marks the first play of the year for Arcadia Stage, Arcadia High School’s theater program. It follows the story of a young boy growing up in poverty who is given the opportunity of a lifetime.

Alison Wright, a junior at Arcadia High School and member of the Advanced Theater program, said, “This play was chosen mainly because it explores the themes of family and positivity. Especially since it is almost the holiday season, we thought it would be a great transition before Thanksgiving and Christmas.”

During the moments leading to showtime, performers prepare both physically and mentally. They dedicate a large amount of time to thoroughly stretching—sometimes incorporating yoga in this routine. In addition, they exercise their voices by practicing different vocal activities. “Right before the show starts, many actors can be spotted wearing headphones to clear distractions and push themselves mentally to step in the shoes of their characters,” Wright said.

Although not all students in Advanced Drama had a lead role, it does not mean they do not gain valuable experience. “Since I am in Ensemble, I am given the opportunity to see the process from a different perspective,” Wright said. “Now, I have a better understanding and idea of how to get a more prominent role for the upcoming shows.”

Out of the three shows, the Friday show completely sold out. With a body in each of the 1,163 seats in the PAC, it made for a packed house. For many audience members, seeing the show transported them back to their childhood. Arcadia High School junior, Mina Choi, said, “It has been quite some time since I have actually seen Charlie and the Chocolate Factory on television. Now that I have had the opportunity to watch it live, I was able to remember the core values of family, love, and humbleness that was instilled within me many years ago by the movie. It was refreshing.”

Throughout the night, audience members were able to fully immerse themselves in the setting of Willy Wonka’s factory. Charlie and the Chocolate Factory themed snacks, candy, and beverages lined the outside of the entrance. For two lucky play-goers, they could find a golden ticket in their chocolate bars, with each ticket equivalent to two free VIP tickets to see Arcadia Stage’s next show, Les Misérables. The musical-based play will take place from March 14 through 16.

When the play ended, performers were greeted by friends, family, and supporters outside of the PAC. Happy faces lit the cold night with pride and joy.

“I will definitely never forget this experience,” Choi said, “It was a night to remember.”