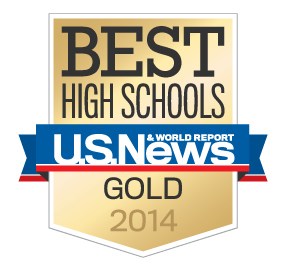 U.S. News and World Report has named Arcadia High School as one of its gold medal schools in its “2014 Best High Schools” national rankings. Less than three percent of the more than 19,000 schools that were evaluated earned a gold medal. This is the third consecutive year that Arcadia High School has been recognized with the top honor.

“This recognition is just another proud reflection of the quality of our students, teachers, staff, parents, and community,” said Dr. Brent Forsee, Principal of Arcadia High School. “It’s also a reflection of our entire district, and all our teachers and staff throughout it. They are sending us well-prepared and engaged students as soon as they walk through our doors.”

According to U.S. News and World Report, “The data show that receiving a gold medal is truly a rarity among the public high schools that U.S. News evaluated for this ranking.”

In addition to offering a wide variety of Honors and Advancement Placement (AP) courses, Arcadia High School has a unique offering of academic teams and clubs. These highly successful clubs include the Academic Decathlon, History Bowl, Math Team, Ocean Science Bowl, Quiz Bowl, Physics Team, Science Bowl, Science Olympiad, Constitution Team, Robotics Team, Speech and Debate, and Destination Imagination. This year 22 students were recognized as National Merit Scholarship finalists. One of those finalists, senior Nathan Chou, also earned a rare perfect score on his AP Calculus BC exam. He was one of just 11 students in the world to achieve perfection. Another student, Kevin Chou, earned the highest possible score on the ACT Exam. Both astonishing results were achieved by less than one-tenth of one percent of students who took those particular exams.